A brief analysis of the production process and quality defects of laminated glass. 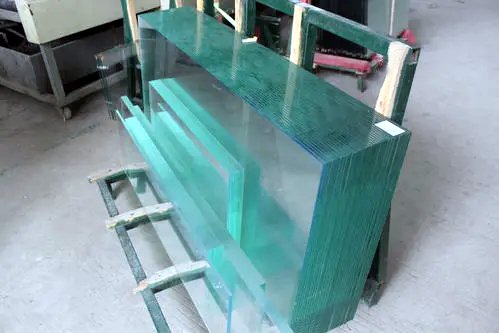 1. What is laminated glass?

The laminated glass is a glass product made of two or more pieces of glass, embedded and sandwiched between two layers of glass with organic material glue, and then heated and pressurized. Commonly used organic materials are glued with polyvinyl butyral film (ie PVB film), PVB film has special excellent performance, the optical index of the film is very good, the light transmittance reaches more than 90%, heat resistance, cold resistance Good resistance, impact resistance, elasticity, moisture resistance, and anti-aging properties. Its refractive index is almost the same as glass. The film does not harden above -50°C and has good bonding performance at 130-140°C. At this temperature, the glass is bonded to the air pressure with high pressure, and the glass is firmly bonded to the glue layer. Laminated glass has a high-strength, elastic, and penetration-resistant middle layer, which can withstand huge impacts, and the glass is broken in time, and the fragments still stick to the film, so it has a high safety performance. 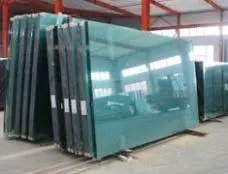 The laminated glass is put into the washing machine, washed and dried by the washing machine, and then transported to the laminating room where the temperature and humidity are controlled. The appearance of the glass is usually inspected here. Next, place the cut film on the glass surface. The film needs to be placed flat to ensure that there are no wrinkles, and then the second cleaned glass is placed on the film—that is, a piece of laminated glass has been closed. The filming process needs to be carried out in a very clean environment. The staff needs to wear headgear and gloves to cut off the excess film from the edge of the laminated glass. Then the glass is positioned and transferred to the rolling section. The rolling section slowly heats the glass and uses a rubber-coated roller to press out the remaining air between the glass and the film, and seal the edge of the glass. Finally, the glass is put into the autoclave. The autoclave is the last process of the laminated glass. It can make the residual air into the film and realize the uniform fluidity of the film. The autoclave process strengthens the adhesion between the film and the glass, thereby The result is a piece of glass that looks like a whole---laminated glass.

When the glass is combined, the PVB film suitable for the width of the glass should be selected first, and the film should be kept clean. Avoid directly connecting the corner film and the glass with your hands. The PVB film should be naturally flattened, and do not stretch, and align the inside and outside of the glass. The film should not have a sense of unevenness. Check whether the reserved marks overlap, and then cut off the excess film. During the cutting operation, keep the blade inclined and leave 0.5 mm~2 mm film at the edge of the combined film. Avoid shrinking film caused by film shrinkage. After the film and glass are combined, put on a vacuum rubber band and check the sealing strip. The tension around the glass should be even, and then the glass should be cold drawn to remove the air in the middle of the combined film, and the cooling time should not be low In 5 min. 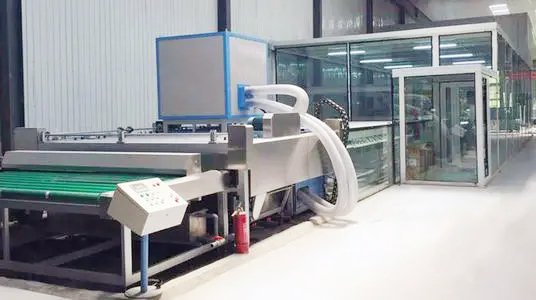 2.3 Operation process of glass in the autoclave

The production process in the autoclave is the last in the production of laminated glass. The pre-heated and pre-pressed glass must undergo constant temperature and high-pressure treatment before it can be used to make the PVB film and the glass laminate better bond together. Constant temperature and high-pressure treatment should be operated in an autoclave. Firstly, the semi-finished products of laminated glass that are bonded together are separated from each other and placed on a special stand for the autoclave to make it firm, and then close the door of the autoclave. The autoclave is pressurized and aerated. When the air pressure in the autoclave reaches about 0.75 MPa, the autoclave is stopped. This is because the edges of the laminated glass are not firmly bonded, to make the space between the glass interlayer overflow under the action of pressure, and prevent air from entering the interlayer from the edge. When the temperature in the kettle reaches about 130°C, immediately stop heating and maintain this temperature. At this time, the laminated glass can be bonded, and the inside of the kettle is pressurized twice. Since the glass has reached the bonding temperature, the pressurization will not cause air to enter the interlayer. When the pressure reaches 1.2 MPa, stop the pressurization. And keep the pressure balance, after 1 h~1.5 h, reduce the temperature in the kettle to 50℃, start to exhaust, and reduce the pressure in the kettle until the air is completely discharged, open the kettle door to push out the glass. At this point in the production of laminated glass, there is a finishing touch, which is to inspect the glass piece by piece and trim the qualified products. Cut off the surrounding excess film; select and repair the glass containing bubbles and degumming, and re-enter the kettle to pressurize and heat. 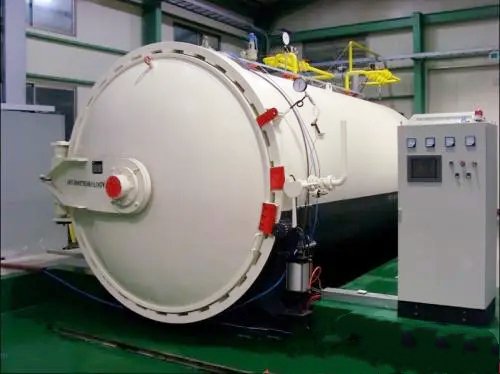 The production process in the autoclave 1

With the continuous improvement of production technology, most autoclaves have the function of automatic control. In actual operation, the processing is carried out according to the characteristics and actual conditions of laminated glass.

In the actual production process, the quality defects of laminated glass are roughly divided into two types, appearance defects, and performance quality defects. Below we respectively discuss the causes and solutions according to different defects:

3.1 Defects of the original film

The original sheet of the laminated glass must meet the requirements of its use. Optical distortion, bubble inclusions, stones, waves, nodules, etc. are all included in the original sheet, so it is in the production process. All glass should be strictly inspected to eliminate unqualified original pieces.

①Water mark: The main cause is that the position of the wind knife is incorrect during the cleaning process of the grinding edge, and the wind pressure is too large, resulting in the water covering the glass surface not being dried. The solution is to adjust different air knife heights according to different thicknesses of glass, adjust the cleaning speed according to the actual situation, and adjust the placement angle of the glass during cleaning.

②Scratch: In the cutting stage, the cleanness of the cutting platform and unloading platform largely determines the number and size of the scratch. The reason for the edging stage is that the glass fragments are not processed, and the belt pressure of the edging machine is set too much, which crushes the edge of the glass;

①Small bubbles at the edge of the glass:

②Large bubbles on the edge of the glass:

The semi-circular bubbles appearing in the lower part of the glass are because the material of the working support in the autoclave is too soft, but the laminated glass is separated to form bubbles.

Solution: Use a harder material for the work support.

③Bubble is distributed in various positions

Solution: Analyze the parameters of the pretreatment process and debug the equipment correctly. The surface temperature of the glass can be increased, but a better method is to reduce the working speed of the pretreatment. Incorrect autoclave processing technology.

The film is pulled during cutting, and the film retracts after cutting, resulting in no film on some edges: the key to the processing process is to ensure that the glass and PVB are heated evenly and fully exhausted. If the rolling roller is uneven and heated Uniform, the pre-pressure venting process may cause insufficient venting or premature edge sealing of the film due to residual air bubbles. Uneven film thickness and impurities may cause visual defects such as curves, dark streaks, and spots.

Solution: When processing the film, the focus is to place the film flat on the glass and ensure that there are no wrinkles between the films; before entering the autoclave, keeping the temperature of the laminated glass at 21-27°C can help avoid wrinkles. Produce and reduce visual defects.

In the process of processing. The film can flow or fill a certain gap and maintain the adhesion of the glass. Rolling and autoclave processing may make the interlayer appear to be successfully bonded, but over time, mismatches caused by bows, waves, and warped edges may cause edge degumming or air bubbles. 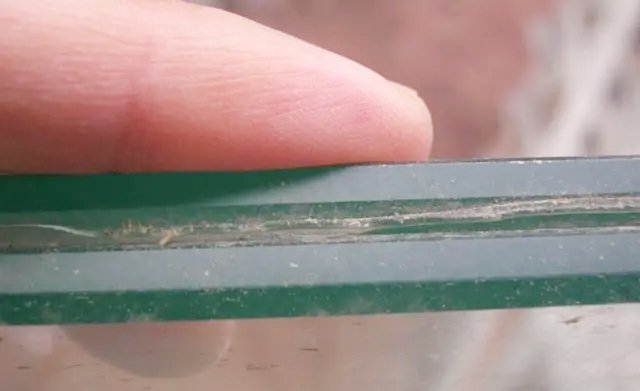 The main reason for degumming is that the adhesion between the laminated glass film and the glass is too low.

Solution: Check whether the water quality of the washing machine is below 15us, check whether too much or too little cleaning agent is used, and there are impurities on the glass surface (such as cutting oil or cleaning agent), check whether the cleaning brush is worn or the position is If it is too high, check the humidity of the film. If the temperature is too high, it will reduce the adhesion of the glass. The relative humidity of the filming room should be controlled at 25-30%. Check the glass warpage or the wrong direction of the film (special attention to tempered glass). 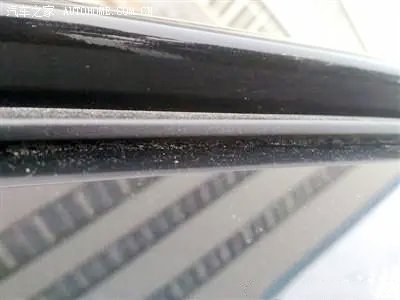 The degumming phenomenon of the laminated glass 1

Defects under high-temperature test: Boiling test (2h/100℃ 212f): If the laminated glass has bubbles formed in the boiling test, this is generally caused by low-quality pretreatment. This means that during pretreatment, the space between the glass and the film is only temporarily covered, and it is released after the 100°C boiling water test to form bubbles. (This can also happen when there is too much water in the film).

After the test film is opened, it is placed in humid air (humidity> 30%), or placed in an overly dry room (humidity ≤ 25%). At this time, the film will contain too much moisture, or too little moisture, Which directly affects the adhesion of the film. Make sure that the film is opened or processed in a humidity-controlled room (relative humidity is maintained at 25%-30%), for the entire roll of unsealed film that has been stored in a room with high humidity, or for The whole roll of the unsealed film kept in a room with low humidity must be moved to a room with controlled humidity (it is best to be able to hang it separately from the film).