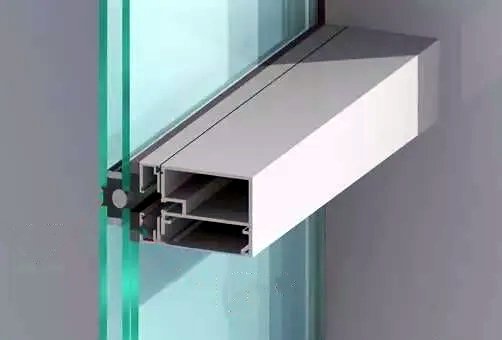 1. Comparison of the permeability of insulated glass sealed with silicone and organic glue

The French Insulating Glass Association (CEKAL) earlier analyzed those insulating glass that failed prematurely. They found that all the failed insulating glass had different degrees of secondary seal adhesion damage under ultraviolet radiation, and there was no In one case, silicone was used for the second seal. German doors and windows (the term "doors and windows" is provided by the industry encyclopedia) Institute (IFT) also reported the same trend at about the same time. 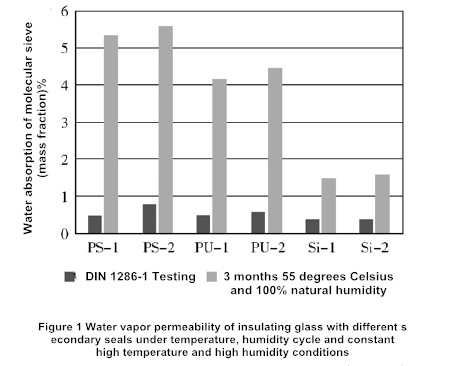 In some developing countries, the service life of insulating glass has not been widely understood.

In fact, the service life and thermal conductivity of insulating glass will be affected by the following factors:

①The anti-diffusion property of the edge seal to water vapor and gas.

The water vapor and gas permeability of the first seal is much lower than that of the second seal. Therefore, the usual service life is determined by the diffusion through the cross-section of the first seal, as shown in Figure 2. 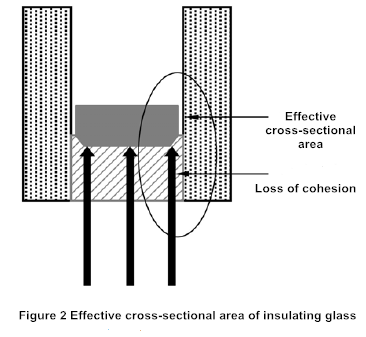 3. Changes in the water vapor transmission mechanism caused by the aging of the edge seal

In order to study the causes of premature failure of insulating glass, Van Santen and Schlensog conducted in-depth research on this. The hollow glass is exposed to the environment or the edge seal is aging due to service degradation factors. The aging can cause changes in the water vapor transmission mechanism and lead to water vapor intrusion or gas leakage. During the use of insulating glass, if the water vapor penetration increases significantly, it indicates that the system is aging, so the increase of water vapor penetration is a good indicator for judging whether the system is aging. Before aging, in a stable state, when the desiccant is far from being saturated, the amount of water vapor intruding into the hollow glass in a unit time should be a constant. When the desiccant in the hollow glass is close to saturation, the intrusion of water vapor should be slowed down because the local pressure difference is balanced. However, when the insulating glass installed in the laboratory and on-site undergoes repeated humidity and temperature cycling tests, as the exposure time increases, the water vapor penetration often shows a non-linear increase (Van Santen1986, Marusch1988), as shown in Figure 3. . Van Santen (1986) attributed this behavior to the movement of the edge seal due to temperature and pressure fluctuations, which caused the physical degradation of the first seal. Due to this repetitive movement, the first seal may fail cohesively or cohesively. These two failure mechanisms can be observed in the actual use of insulating glass, usually accompanied by the first seal of PIB penetrating into the visible cavity. 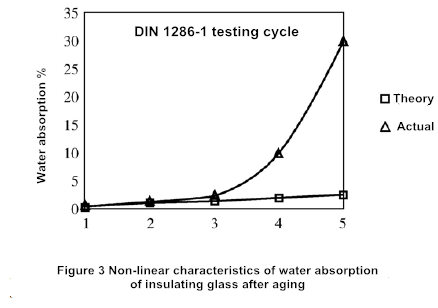 Schlensog (1986) observed the process of adhesive loss on glass after the second seal of organic glue was irradiated with ultraviolet light through the technique of polarized microscope. We all know that when the sun shines on the conventional insulating glass, a certain amount of incident light reaches the edge sealing part through the internal reflection of the glass. When exposed to such a lethal shortwave spectrum for a certain period of time, the organic glue will lose its glass adhesion. The study also showed that when edge seals can detect adhesion or boundary failure, delamination under microscopic conditions already exists. As the exposure time continues, the delaminations become larger and connected to each other, leading to macroscopic failure. It is possible that before the macroscopic failure occurs, water vapor and gas penetrate into the inner cavity along the damaged area of the interface, and the intrusion of water vapor may accelerate the mechanism of this failure.

The temperature change of the edge seal will cause periodic shearing and peeling forces between the spacer and the glass due to different thermal expansion coefficients, and generate high stress on the edge seal, which may be superimposed with the aging effect. The shear displacement in the interface will generate high tensile stress near the contact surface of the glue and the substrate, which is almost twice the original shear stress, which is why the sheared sealant is prone to fail on the substrate surface. If the second sealant hardens within the service life, the increase in tensile stress may cause partial or complete loss of adhesion.

When water vapor or gas diffusion occurs, the control of the effective cross-sectional size through the edge seal often depends on the hollow glass manufacturing process. The correct insulating glass manufacturing process can reduce the effective cross-section through the edge seal when water vapor or gas diffusion occurs. The requirement of the manufacturing process is that in addition to the correct size, the first seal must be free of bubbles and completely wet the contact surface between the spacer and the glass. In the case of rigid spacers, the degree of expansion of the first seal under positive pressure is determined by the tensile strength of the second seal against the force. In fact, a positive pressure difference exists when the atmospheric pressure is low or at a high temperature, and temperature is the cause of most pressure differences. The pressure difference caused by temperature exerts a much higher force on the edge seal than the force caused by wind pressure and atmospheric pressure change (see Figure 4). Therefore, the tensile stress behavior of the second seal at a high temperature (Young's mode Number) must be considered. The higher the tensile resistance of the second seal, the better the diffusion cross-section of the first seal will be maintained. 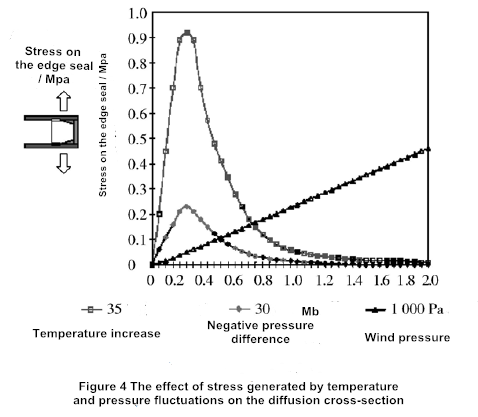 In addition, the factor that further affects the service life and U value of the insulating glass is the duration of the first seal expansion. Regardless of the type of secondary seal used, this opening time always exists with the period of the positive pressure difference. As mentioned earlier, the degree of opening depends on the tensile strength of the secondary sealant. However, once the positive pressure difference is weakened and the internal and external pressure difference is balanced, the length of time required for the edge seal to close the first seal opening varies according to the elastic recovery rate of the second sealant used. A sealant with a low elastic recovery rate exhibits viscous fluidity in its stress-strain behavior. Due to this stress relaxation principle, its tensile stress will be reduced during the maintenance extension. The result is that when the external force is eliminated, they no longer have the ability to quickly close the first sealed opening and return to its original size. If the second seal cannot be fully restored, the first seal will be permanently deformed. In addition, because the opening of the diffusion channel mainly exists in the high-temperature period, the second sealant with a poor elastic recovery rate will obviously shorten the service life of the insulating glass during the high-temperature period.

In addition to fluctuations in temperature and atmospheric pressure, the degree of water vapor standard in the surrounding environment also indirectly affects the opening and closing degree of the first seal. In the presence of high water vapor standards or higher, such as direct contact with liquid water, the absorption of water by the second sealant will increase its volume and reduce its mechanical properties. In short, the lower the crosslink density of the polymer sealant grid (the term "density" is provided by the industry encyclopedia), the higher its water absorption. For most glues, the degree of negative impact caused by water absorption is proportional to the total amount of water absorbed. The water absorption of the second seal will cause the opening of the first seal to expand, so the effective diffusion cross-sectional area is also increased.

Insulating glass is exposed to different environmental and use factors, which will hurt the average life of the insulating glass. Literature on this aspect often divides these effects into physical effects (such as temperature and pressure fluctuations, etc.) and chemical effects (such as Atmospheric environment, chemicals, etc.) into two categories. Among them, some environmental impacts, such as sunlight and water vapor, will produce physical and chemical effects at the same time.

The high temperature will accelerate most of the physical and chemical reactions, such as aging the insulating glass sealant and accelerating the diffusion of water vapor or gas through the edge seal. Temperature fluctuations cause pressure changes in the insulating glass. These pressures will produce mechanical stress on the edge seal, the strongest effect on the small size, and the greatest stress on the edge seal. In addition, after heating, as mentioned earlier, the different thermal expansion coefficients of the spacers and the glass sheets will cause shear and peel forces to act on the edge seal.

①Weather resistance, that is, resistance to environmental factors (physical properties and adhesion are considered at the same time).

②It has the structural strength to restrain the movement of the edge seal to minimize the change of the effective diffusion cross-sectional area of the first seal.

③Under the conditions of use, it has low water vapor and gas permeability.

6. The characteristics of insulating glass as the second seal

Silicone as a second sealed insulating glass can maintain excellent performance in harsh natural environments because silicone itself has some chemical properties that organic glues cannot achieve.

The Si-O bond of the silicone polymer itself has high bond energy and a large bond angle, so it is transparent to ultraviolet rays and most invisible light below the wavelength of 280nm, and the Si-O The key will not be easily interrupted. Secondly, the interaction force between the silicone molecules is relatively weak, and the molecular chain is flexible, which makes the silicone polymer have good flexibility and is hardly affected by the environmental temperature, especially the extreme high and low temperature.

The elastic modulus of organic rubber (the term "modulus" is provided by the industry encyclopedia) gradually decreases with the increase of temperature. From -20 ℃ to 70 ℃, the modulus of polysulfide rubber will decrease by 40%, and polyurethane will decrease About 60%, while silicone is almost unaffected by it, and its modulus remains unchanged. 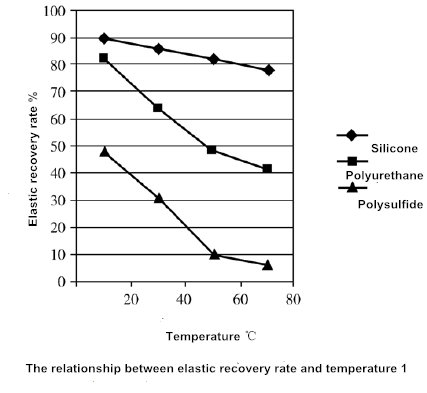 Figure 5 The relationship between elastic recovery rate and temperature 1

Absorbing water, water, and water vapor can cause the natural stress of the edge seal and the expansion of the insulating glass sealant itself. Organic glues are all hydrophilic (the term "hydrophilicity" is provided by the industry encyclopedia), and generally exhibit a higher water absorption rate, while sealants with special formulations (such as DC3362) exhibit better Ketone sealant has lower water absorption (see Figure 6). 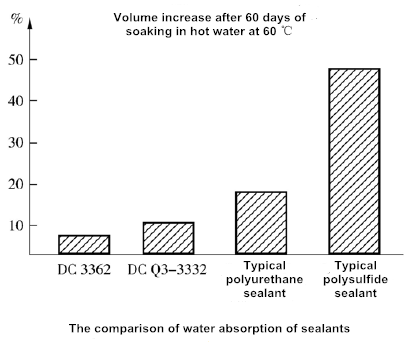 Figure 6 The comparison of water absorption of sealants 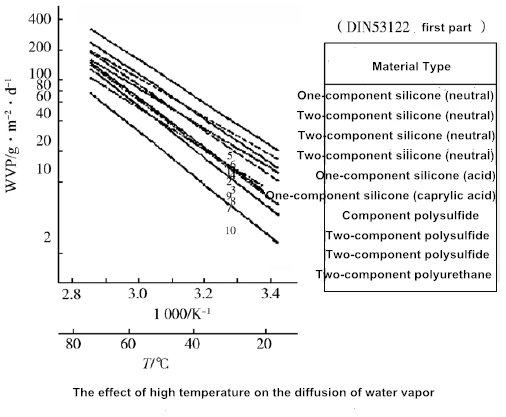 The insulating glass with the second seal of silicone has a lower water vapor permeability than the insulating glass with the second seal of the organic glue, because the permeability of the edge seal is almost completely determined by the permeability of the first seal (PIB), and as The silicone of the second seal is better than the organic glue in terms of viscoelasticity, especially the tensile strength and elastic recovery rate under actual use conditions, so it is better than the organic glue in preventing the diffusion of water vapor into the first seal. good. The gas diffusion resistance of the edge seal depends on the permeability of the first and second seals. Silicone as a second-sealed insulating glass has been tested under actual service conditions and proved to have high durability and service life because the physical and bonding properties of the silicone second-sealing are hardly affected by the main environmental aging factors. That is the effects of ultraviolet rays, heat, and humidity.