The features and applications of magnetically controlled roll-film insulating glass② 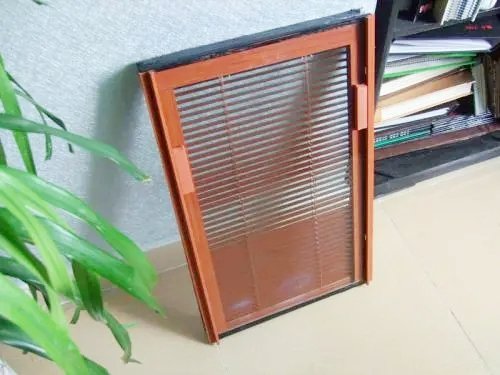 The working state of the magnetically controlled roll film type insulating glass can be roughly divided into three extreme states:

(2) The roll film is fully unfolded.

(3) The roll film is in a half-unfolded state.

In the first state, the film is fully rolled up. It can be considered that its related thermal insulation performance is the same as that of conventional insulating glass.

In the second roll film fully unfolded state, it is the same as the hollow glass with a fixed film added between the two glass gaps in the conventional hollow glass. For example, the Southwall Technology Company of the United States produces a thin film called HeatMirror, which is used to sandwich between insulating glass. According to the test data released by the company, in the hollow glass made of various glass, when different types of films are clamped, the relevant data of the entire block of hollow glass such as transmittance, reflectance, and glass before and after the film is clamped. U value, shading coefficient, ultraviolet transmittance, etc. have all changed greatly, which proves that adding a layer of film in the middle of the hollow glass can effectively change the basic performance of the whole hollow glass.

In terms of heat insulation, convection, and conduction, because there is a certain gap between the periphery of the unrolled film and the inner space of the hollow glass, there will be a certain convection heat loss when there is a temperature difference, so the performance in this aspect is lower than the formation of the internal clamp fixed-film. Insulating glass with two enclosed spaces is better than conventional insulating glass.

The actual effects of the above combinations are discussed separately as follows.

The characteristic of this kind of combination is that it can use low-cost transparent insulating glass, which can have strong heat insulation or dimming effect after being loaded with different roll films. It has an obvious two-way adjustment effect on solar energy when the film is rolled up or fully unfolded.

The characteristic of the matt film is that it is transparent and opaque, and has little effect on blocking heat and radiation, but it is very effective in blocking the line of sight and protecting privacy.

The characteristic of heat reflection is that the shading coefficient is small, and the cost is also low. The roll film is unrolled in summer for shading, and the roll film is folded in winter to transmit sunlight for heating, which has a good overall energy-saving effect throughout the year.

The color type and color depth of this roll film can have a lot of choices, so there is a considerable range of changes in the shading coefficient and light transmittance, and specific designs can be made according to the different requirements of users.

This is a very ideal combination because it can have better lighting and heat insulation compatibility. When there is sunlight in winter, the film rolls up and can transmit most of the solar heat radiation; when there is no sunlight, the film rolls out to prevent the loss of indoor long-wave thermal radiation. When there is sunshine in summer, the roll film can be opened to block most of the heat radiation from entering the room; at night, when the indoor temperature is higher than the outdoor temperature, the roll film can be folded to dissipate the indoor heat radiation. Its comprehensive energy-saving effect throughout the year is better than that of heat-reflective film, and it has obvious two-way energy-saving and dimming functions.

The characteristics of this type of combination are: because the heat reflective glass itself has a low light transmittance and shading coefficient, plus the heat reflective film or the heat absorption film is of little significance, and the adjustment effect after adding other films is not obvious...

The main function after unfolding is to block the line of sight.

After unfolding, the heat insulation effect of the entire glass can be further improved.

The characteristics of this type of combination are similar to the effect of the above-mentioned heat-reflective insulating glass + different roll film combinations.

Low-E insulating glass is characterized by high light transmittance. After unfolding the matte film, the light transmittance can be reduced, so that direct light becomes diffuse light, and it can block the line of sight. It is quite ideal combination.

This combination still has certain uses on some special needs occasions. For example, many occasions need to be kept dark during the day. The use of this roll film is a layer of blackout curtains. -E film is blocked, so there will be no overheating problem even with black film.

From the above analysis, it can be seen that there are various combinations of various roll film materials and various conventional insulating glass. In the specific use, it should be selected according to the environment. 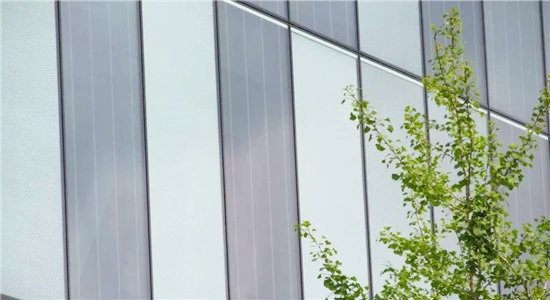 Architectural glass generally provides visual transparency or daylighting, and at the same time, it should also have the function of adjusting the radiant energy passed into or out of the building, to achieve a comfortable indoor thermal environment with the lowest possible energy consumption. It is necessary to take into account various factors such as appearance and cost, which are also some basic principles for designing and adopting architectural glass.

From the perspective of thermal insulation and energy-saving, according to "International Civil Building Thermal Design Standards" , the country is divided into five building thermal design zones, including severe cold areas, cold areas, hot summers, and cold winters, and hot summers. Warm winter areas and warm areas. In these different areas, climate change and the different orientations of specific buildings have different requirements for heat insulation of doors and windows. If conventional insulating glass with static control performance is used, it is difficult to meet some or even contradictory requirements at the same time. However, if magnetically controlled roll-film insulating glass is used and the dynamic adjustment function of roll-film is fully utilized, better heat insulation and energy-saving effects will be obtained.

(1) Let as much solar heat radiation as possible enter the room,

(2), effectively prevent indoor heat from being lost to the outdoors through radiation.

To meet the above requirements at the same time, it is recommended to use ordinary transparent insulating glass with Low-E film or heat reflective film as the main structure. When there is sunlight, the film rolls up so that ordinary transparent insulating glass can pass most of the heat radiation. When there is no sunlight, the film rolls out to effectively prevent the long-wave heat radiation in the room from dissipating.

In hot summer and cold winter areas, it is characterized by hot summers and cold winters. With the improvement of living standards, the cost of cooling is higher than the cost of heating in terms of building energy consumption. Correspondingly, the use of conventional insulating glass should take into account both solar radiation transmission and shading, and highlight the shading function. When choosing magnetically controlled roll-film insulating glass, it should be selected according to the actual local climate conditions and the specific orientation of the building. At this time, the transparent insulating glass is equipped with Low-E film or heat reflective film, and Low-E insulating glass is equipped with Low-E. Combinations such as film or heat-reflective film are better choices.

In areas with hot summers and warm winters, which are characterized by long periods of high temperature and strong solar radiation, building energy consumption is mainly refrigeration, and building glass should also take sunshade as its main function. In this area, it is recommended to use Low-E hollow glass with various functional roll films, which can achieve better results while taking into account the requirements of energy-saving and daylighting.

For example, in most areas close to the equator, high-transmittance solar control Low-E insulating glass with matt roll film can be used as door and window or curtain wall glass. The light transmittance of the entire Low-E insulating glass is 70%. The light transmittance is 75%. When the film is exposed to direct sunlight, the visible light transmittance can be reduced to about 50% when the film is unrolled, and at the same time, the direct light becomes diffuse light, which has suitable lighting and visual comfort. When it rains on a cloudy day and there is no direct sunlight, close the roll film to obtain sufficient lighting. In addition, the characteristic of the matt roll film is light transmission and opacity, no matter day or night, it has a good effect of blocking the line of sight, and at the same time does not damage or affect the appearance and decoration of the curtain wall glass. This combination should be a way worth promoting.

From the perspective of daylighting and obstructing the line of sight, another important contribution of the magnetically controlled roll-film insulating glass to modern architecture is to provide more comfort options. Taking indoor lighting as an example, in the face of changes in climate and light in nature throughout the year and 24 hours a day, the existing conventional insulating glass with various static control functions has a rather narrow adaptation range. To overcome these shortcomings, it had to be supplemented by installing various adjustable curtains and other devices indoors and outdoors. However, the magnetically controlled roll-film insulating glass has two extreme states (the roll film is fully folded and fully expanded) and a variety of intermediate states, which have a larger range of adaptation and adjustment for lighting. 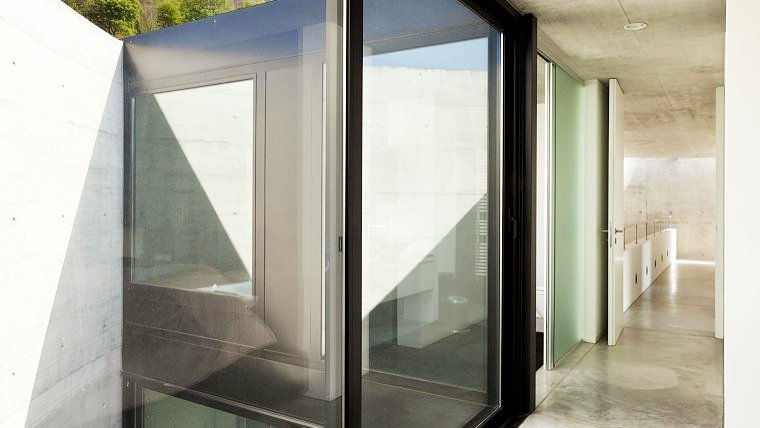 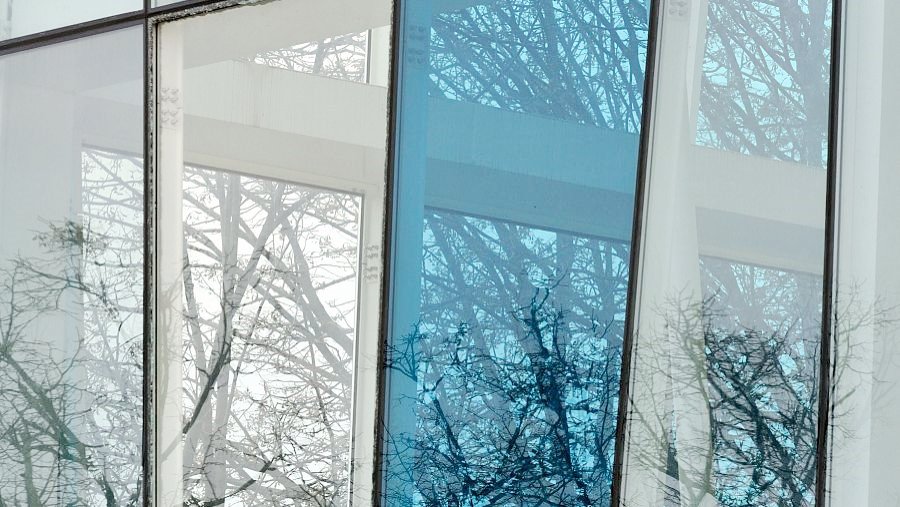 When the magnetically controlled roll-film insulating glass is used as door and window glass, through different choices of conventional insulating glass and roll film, while taking into account the requirements of building energy-saving, there can be more solutions to control the outdoor sight shielding. For example, the roll film can use a single reflective film or a heat reflective film with a light transmittance of less than 30%, a heat absorption film (color film), a matte film, various patterned films, etc., which can better meet the outdoor sight shielding after unfolding. Sexual requirements. In terms of performance and effects, the magnetically controlled roll-film insulating glass can eliminate internal and external sun-shading devices to a considerable extent, especially indoor curtains.

When the magnetically controlled roll-film insulating glass is used as curtain wall glass, the appearance of the curtain wall glass is the first. It should highlight the visibility and heat insulation without affecting the appearance. At this time, light gray frosted or other similar rolled film can be used to improve the visibility of the line of sight and improve the consistency of the appearance of the curtain wall glass.
The roll film of the magnetically controlled roll film type hollow glass is flatly unfolded inside the hollow glass. Compared with ordinary curtains hung on the outside of the glass, its appearance effect is better. At the same time, it avoids the trouble of cleaning the external curtains. Schools, food factories, and other public places with high hygiene requirements.

In addition to the characteristics of simple structure, high reliability, strong aging resistance, and durability, the magnetically controlled roll-film insulating glass itself, compared with conventional insulating glass, the most prominent is its manual or electric two-way dynamic adjustment function. Good heat insulation, energy-saving, daylighting, and line of sight blocking characteristics provide a wider space for modern buildings and users in the use and selection of architectural glass.