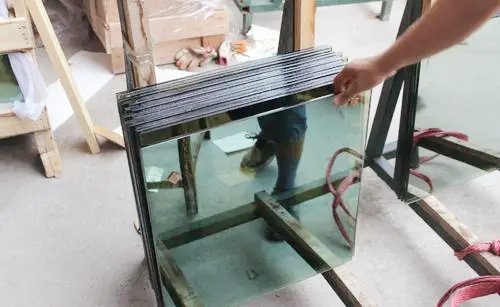 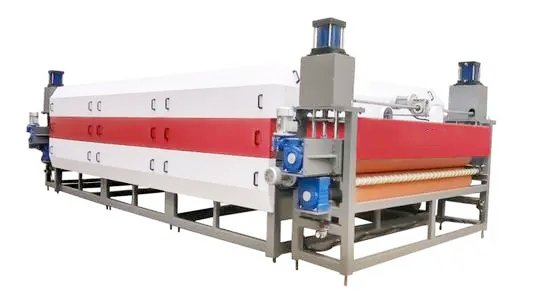 Uneven heating is the most important problem faced by the pre-pressing production of laminated glass. The traditional pre-pressing machine is limited by the heating method and the influence of factors such as the different sizes of the glass, the change in the heating of the glass, the control of the speed of entering the furnace, etc. The glass enters the pre-pressing The temperature uniformity in the furnace is prone to be poor during the machine heating process, which leads to insufficient or overheated partial heating of the glass, which affects the effect of exhaust gas sealing and causes the glass to fail after high pressure. This is relatively common in pre-pressing production. problem. In the pre-press with forced convection heating, the heat in the furnace is agitated by the airflow sent by the fan, so that the heat flows from a high position to a low position, and continuously improves the heat distribution in the furnace, so that the temperature in the furnace tends to Uniformity, avoid local heating and overheating. The fan-forced convection pre-compressor that the author has contacted uses a high-temperature resistant circulating fan that cooperates with the guide device in the furnace to form an internal circulation of heat energy in the furnace to maintain the uniformity of the temperature in the furnace and improve the uneven heating problem. It is useful to Alleviate the problems of local overheating or insufficient heating, achieve satisfactory pre-compression effects, and solve the heating problems of different types of laminated glass.

when thick plate glass enters the roller press, the inside of the glass heats slowly because the glass is thicker, while the outer surface heats faster than the middle part, especially the edges heat faster, which easily leads to the middle part It has not been heated and exhausted, but the edges have been sealed, and the air cannot be removed and a large amount of air remains, causing degumming and bubbles after the glass is under high pressure. This situation is a fatal problem for laminated glass. In conventional pre-pressing production, the solution to this problem is to reduce the temperature and speed by "boiling the frog in warm water", so as to realize the even heating of the glass as much as possible, and the production efficiency is low and the problem cannot be fundamentally solved. When the forced convection roller press is used to produce thick plates, the airflow generated by the fan stirs the heat in the furnace to flow to the lower position, and the heat is continuously formed in the furnace to form a uniform distribution, which is beneficial to increase the heat absorption in the middle of the plate and reduce The overheating of the edge position can effectively avoid the edge sealing in advance, improve the exhaust condition, and form an ideal edge sealing effect.

Low-E glass has strong reflectivity to heat due to its film surface characteristics, which makes the heat transferred to the film surface reflect, and the heat absorption efficiency on the side of the film surface is significantly reduced, and the heat in the furnace The surplus is formed on the side facing the film surface. There is no better way to improve the non-convective prepress. The surplus heat accumulation not only quickly heats the edge of the glass but also aggravates the heat accumulation at the edge, causing the edge If overheating is used to seal the edges in advance, energy consumption is also large. Some manufacturers glue the Low-E glass film layer and the intermediate layer to make laminated glass. The intermediate film is in contact with the Low-E film surface, and the heat reflection of the film directly heats the intermediate film again. The heating situation has improved, but this brings three The first problem is that after bonding with the intermediate film, the heat transfer coefficient is much larger than that of Low-E, which is equivalent to that the Low-E film is short-circuited and loses its contribution to the U value of the heat transfer coefficient. The second is that Low-E is a multi-silver film with poor mechanical characteristics (tensile resistance and shearing force, etc.), which reduces the firmness of the laminated glass. The third is that water vapor immersion is more likely to oxidize the Low-E film. And further, reduce the mechanical and light performance of laminated glass.When Low-E glass is produced as an interlayer, the film can face outwards without losing its functional characteristics, and it needs to be combined with other glass to make it hollow. Forced convection is the most pertinent to the problem of Low-E glass reflecting heat, and it plays a positive role in dredging. Through forced convection, the heat is evenly distributed in the upper and lower parts, which effectively solves the heat reflection problem faced by Low-E laminated glass. , Improve the heating efficiency and improve the problem of exhaust sealing. 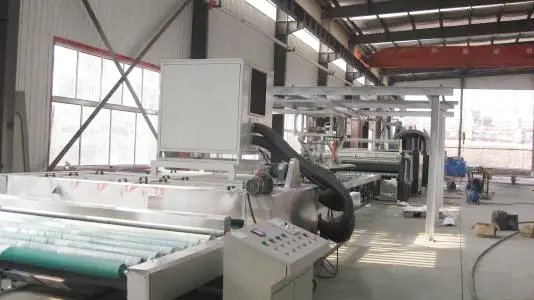 Maintaining temperature uniformity in the pre-pressing furnace is of great significance to the pre-pressing production of laminated glass. It is beneficial to the heating, exhaust, and edge sealing of the glass, ensuring the pre-pressing effect, and is especially adaptable to the new special products. 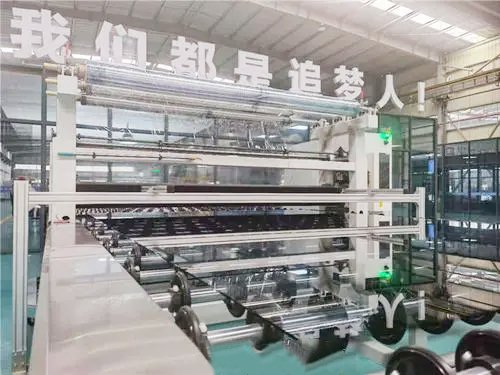 The biggest feature of the forced convection roller press is to improve the temperature uniformity in the furnace, which is conducive to uniform heating of the glass, and the problem of overheating at the edge of the glass is also effectively controlled, which solves the most important problem faced by the traditional roller press. The effect of glass pre-pressing exhaust edge sealing has been significantly improved, and the exhaust edge sealing effect of various new products and complex products has also been effectively improved, which further improves the yield of sandwich production and better control of product quality.The advantages of the forced convection roller press on the production of laminated glass are obvious, and it also has good effects in improving production efficiency, saving energy, and improving product quality. It improves the product quality of the company and continuously meets customer needs and satisfaction. Increase the economic benefits of the enterprise. However, the production of laminated glass involves many processes, from slicing to edging, tempering, glazing, and even external processing. The production control of laminated glass should be systematically scientifically planned and managed, and every process can be controlled. Better improve product yield and quality, enhance the market competitiveness of enterprises, realize energy conservation and efficiency, and create more economic and social benefits for enterprises.