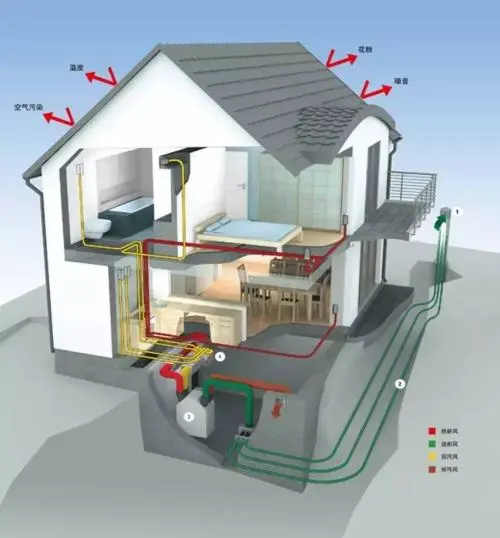 1.1 The concept of passive architecture

According to the data, the earliest term for "passive building" comes from the German "Passivhaus", which translates to Chinese is called "passive building" or "passive house (the term "passive house" is provided by Industry Encyclopedia)". This architectural concept was established in May 1988 by Professor Bo Adamson of Lund University in Sweden and Dr. Wolfgang Feist of Passivhaus Institut in Germany. And established its construction and certification standards.
Usually, non-mechanical electrical equipment interventions, using the building orientation, the setting of shading measures, the application of high-performance building envelopes, and the reasonable design of vents, are used to reduce the building energy consumption of heating, air conditioning, and ventilation systems. The technology is called passive construction technology. Buildings that are designed according to passive building technology and meet the certification standards for passive houses are called passive buildings. The fundamental purpose of the passive building is to use very little energy consumption to adjust the indoor temperature, humidity, air, and other indicators to a standard environment that the human body feels comfortable.

According to the certification standards of PHI, a German sheltered house certification agency, the main indicators of passive building design involve the following aspects:

②The calculated peak heating load value is less than or equal to 10w/m² ;

It can be seen from the above indicators that passive buildings mainly focus on the feelings of the residents, so its standards are mainly focused on the comfort of the living environment and indoor air quality (IAO). Specifically, it is a passive building that must ensure that the indoor air is clean, free of condensation, suitable temperature, good airtightness, and sufficient economy. From the perspective of building energy efficiency, passive buildings need to be designed for building energy efficiency on the premise of ensuring the indoor living environment.

1.3 The development of passive architecture

Passive buildings are developing rapidly in China due to their high energy efficiency and good feelings to the residents. Many owners and architects are trying to practice passive house projects. Corresponding local standards and regulations are gradually introduced, providing a good platform for the development of passive buildings.

At present, individual provinces in my country have also formulated and implemented related design standards and atlases for Passive Houses. For example, the Hebei Provincial Department of Housing and Urban-Rural Development approved the implementation of the Hebei Provincial Engineering Construction Standard Design "Passive Low-Energy Residential Building Energy-saving Structure (DBJT02-109-2016)". Compared with the indexes stipulated by PHI, specific index requirements are put forward especially in the performance of windows. The specific indicators are as follows: overall performance of the window: K<1.0W/m² k, of which glass K<0.8W/m² k; window frame K<1.3W/m² k.

2. Analysis of key points in the design of doors, windows, and curtain walls in passive buildings

To complete the high performance of passive buildings, as the exterior skin of the building, the design of doors, windows, and curtain walls require special consideration. All designs are designed to allow the entire building's outerwear to help the building achieve the standards and requirements of passive architecture. Therefore, in addition to the necessary performance requirements of the doors, windows, and curtain walls of passive buildings, the following aspects should also be paid attention that.

2. Choose a reasonable sealing structure, and do a good job of sealing the edges of the doors and windows and curtain walls to control the airtightness;

3. Set up reasonable shading and make full use of the heat gain the effect of the shading system on the building;

4. Control the condensation problem, especially when the temperature difference between the two ends of the insulation material is relatively large, it is easy to have the risk of condensation;

5. Minimize thermal bridges, whether they are caused by installation or components, should be controlled as far as possible to avoid adverse effects on the thermal performance of the entire curtain wall. 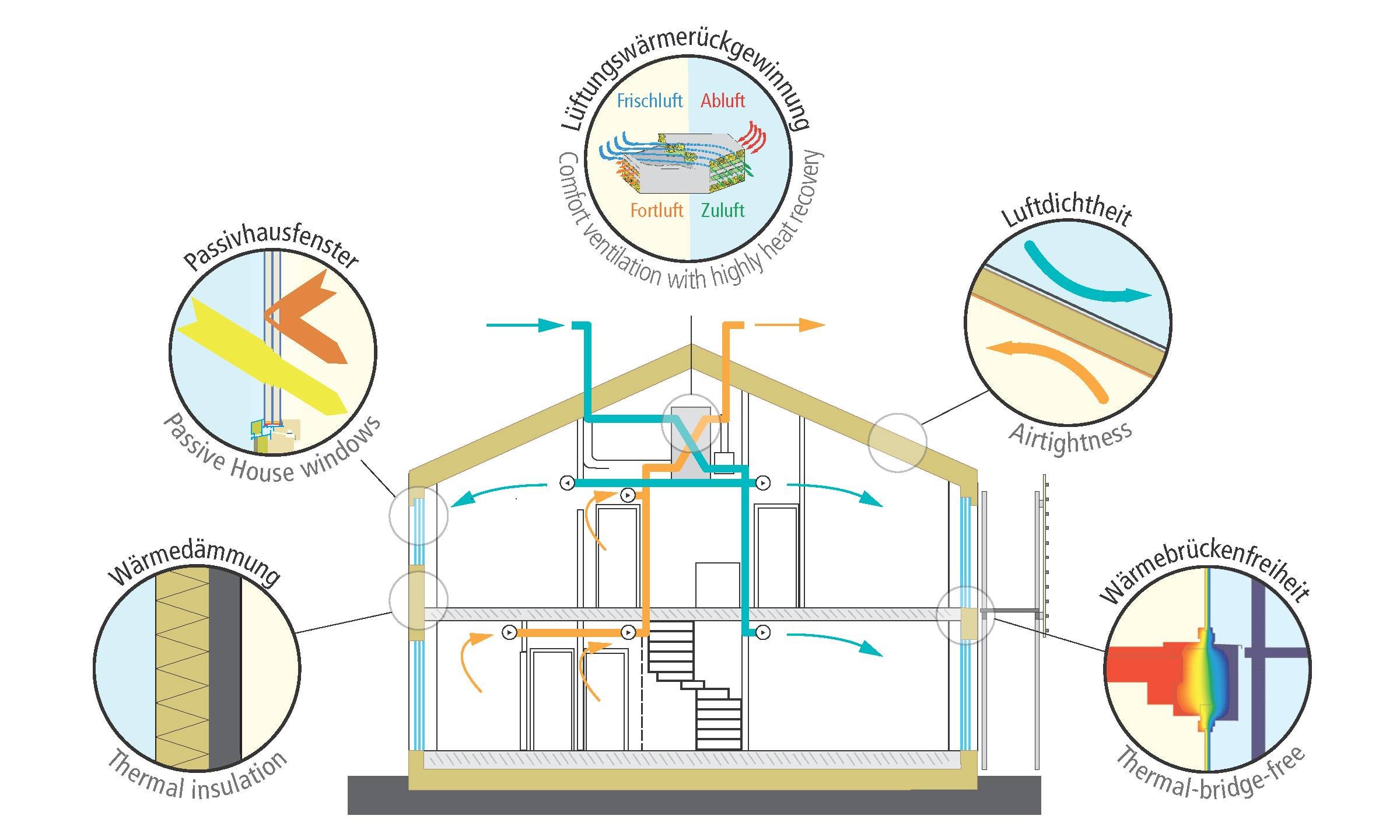 The analysis of key points in the design of doors, windows, and curtain walls in passive buildings 1

3. Introduction to the Passive Architecture of Tongzhou Contemporary MOMA Museum

Contemporary MOMA Architectural Art Museum is located in Tongzhou District, Beijing, and is built by Beijing Runjin Real Estate Development Co., Ltd. The project is located in a cold climate zone, with a total construction area of 1603 square meters, a ground construction area of 1,139 square meters, and an underground construction area of 464 square meters; 3 floors above ground and 1 floor underground; building height 13m; facade curtain wall area is about 2,300 square meters. The main function of the building is the exhibition of architectural art and technology. The architectural design was completed by the Architectural Design and Research Institute of Tsinghua University; the energy-saving design was completed by the High-Performance Building Design and Research Center of the Environmental Energy Institute of China Academy of Building Research Co., Ltd. The effect of the project is shown in Figure 1, and Figure 2. 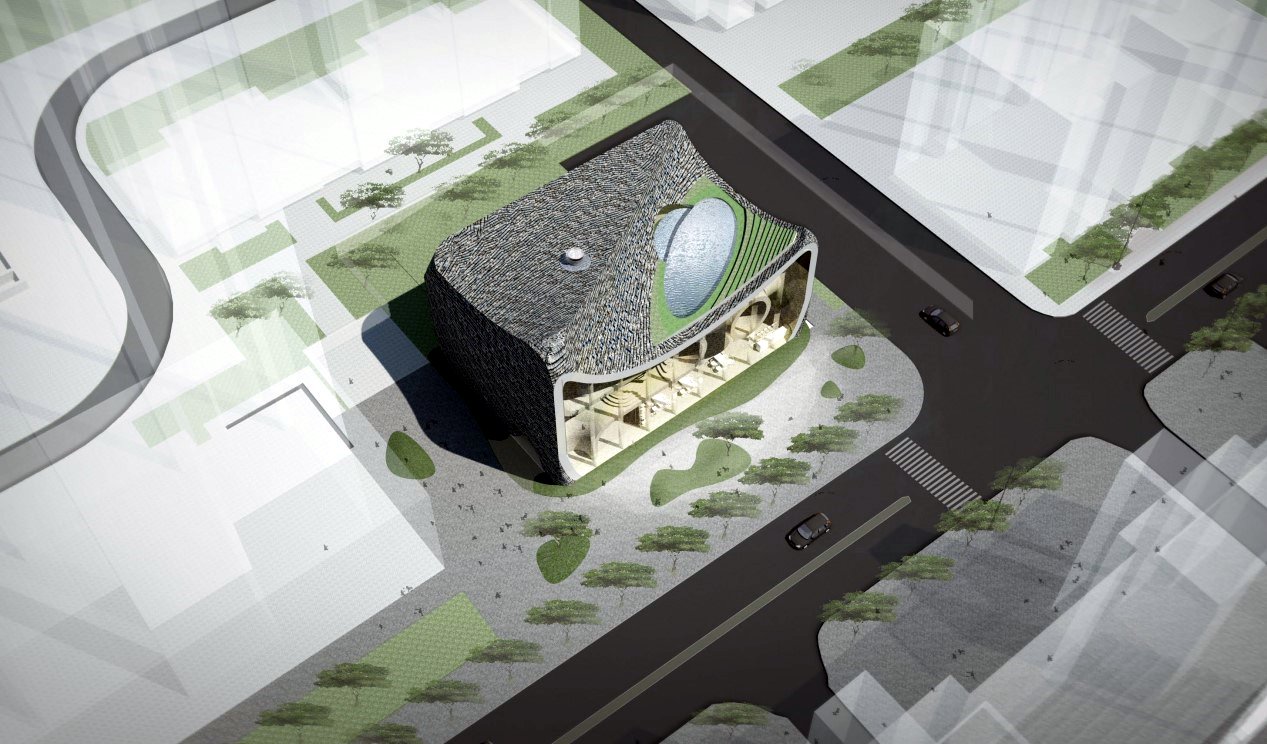 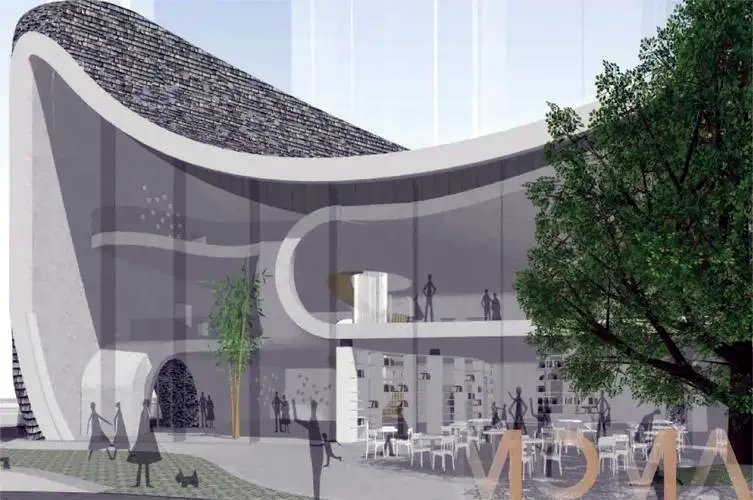 The south facade adopts a transparent all-glass curtain wall system, and the entire height of the glass is 13m. The west, north, and east facades and roofs are in the form of stacked stone slate structures. The thickness of the stacked stone slate is 15mm, and the specification is 250mm wide and 250mm high (the visible part of the stone). The size of the stone is relatively small, and it is an open system, so a waterproof layer is set on the inner layer of the stone.

The entrance and exit of the roof viewing platform and the entrance of the building adopt glass curtain walls with high-energy-saving and high-sealed opening doors. Passive windows are set on the facade of the building, and the window covers are made of aluminum panels in the sky (the term "aluminum panels" is provided by Industry Encyclopedia). Finished glass skylights are installed on the roof, with a sunshade system attached.

3.2 Issues that should be considered in the design of the passive building curtain wall roof system:

(3) It is necessary to solve the overall airtight performance of the entire outer curtain wall.

(5) Passively authenticated windows are adopted for the outer windows, and the shape of the window cover is the outer circle and inner square, and the method of closing the side panels is quite special.

3.3 Heat transfer requirements for doors, windows, and curtain walls of this project

The outer door is made of aluminum-clad wood with high thermal insulation performance and high air-tightness, with a heat transfer coefficient of 0.94 W/m² K.

The skylight adopts a smart skylight with high thermal insulation and high airtightness, with a heat transfer coefficient of 0.5 W/m² K, and an external sunshade. 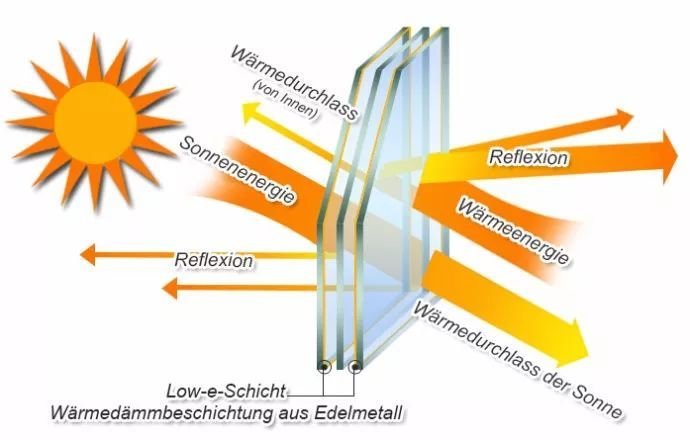 The heat transfer requirements for doors, windows, and curtain walls 1

4. The design of the curtain wall and roof as the building maintenance structure

The main body of the roof of this project is a steel structure. The surface of the roof and the facade are overlapped by slate tiles. The laminated stone curtain wall and roof are the main parts of the entire building's outer protection. According to the requirements of building energy-saving design, the curtain wall and roof part The thickness of the insulation layer is different. But the construction method is the same. The architectural effect of stone slabs is shown in Figure 4 and Figure 5. 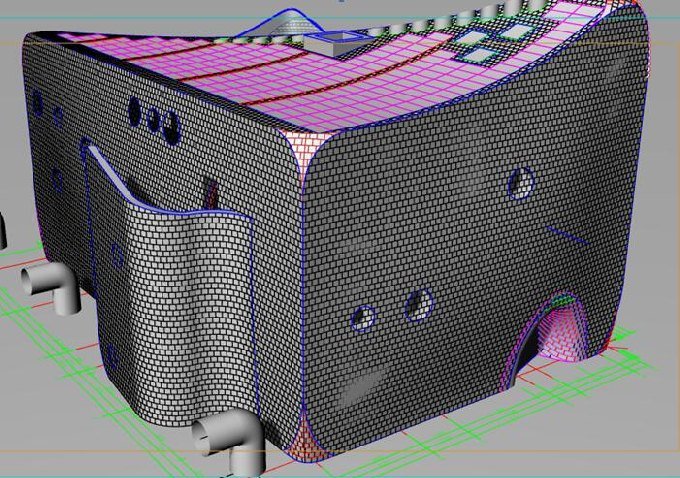 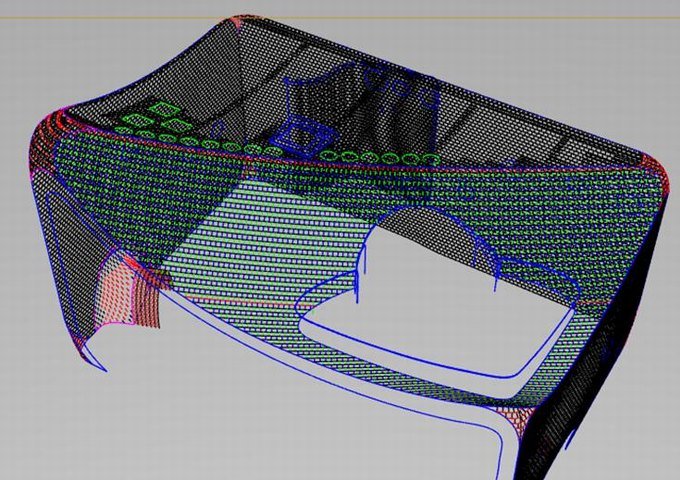 The stone slabs are fixed by hook positioning. The upper stone is overlapped on the lower stone and connected by the lower limit. The basic nodes are shown in Figure 6. See Figure 7 for hooking and fixing. 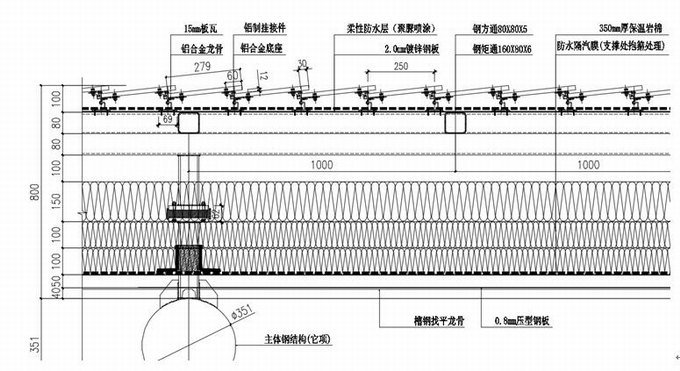 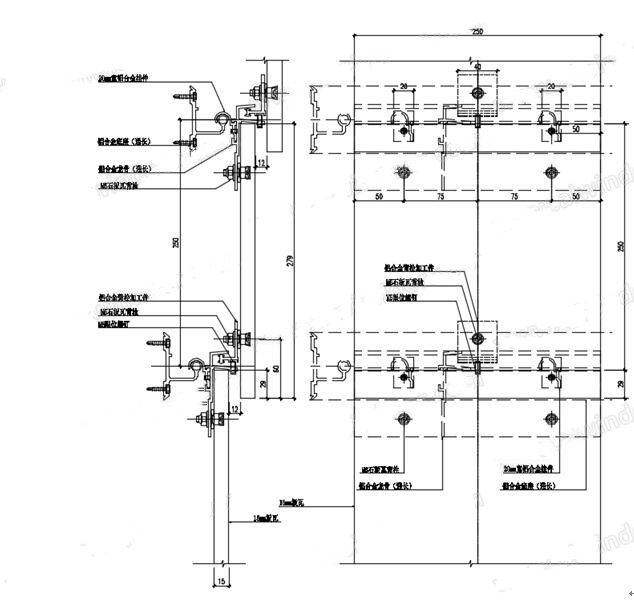 The entrance position of the building has a hyperbolic curve (the term "curved" is provided by the industry encyclopedia) is obvious. When connecting with the main facade, the arrangement of the stone will affect the division effect of the entire building. If the division of the facade is directly projected, the processing of stone slabs will become very complicated. Therefore, we tried a variety of other grid methods, as shown in Figure 8, Figure 9, Figure 10, and Figure 11. Through comparison, the architect finally decided to adopt the grid method shown in Figure 11. 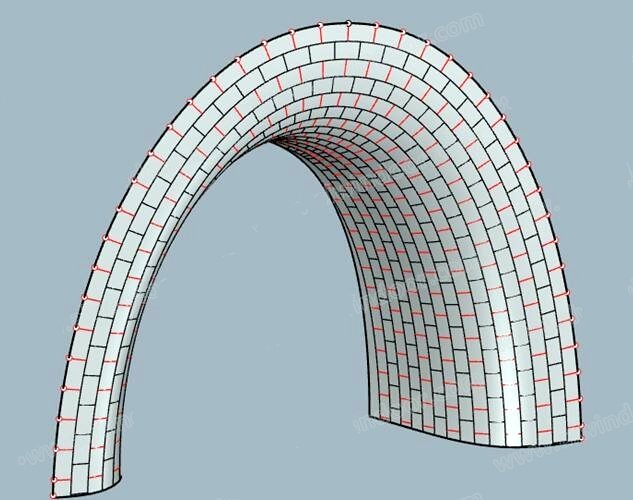 Figure 8 A variety of other grid methods 1 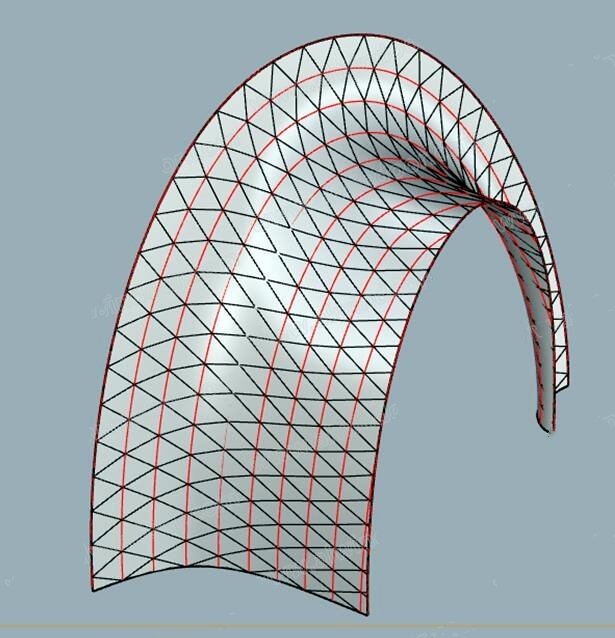 Figure  9 A variety of other grid methods 2 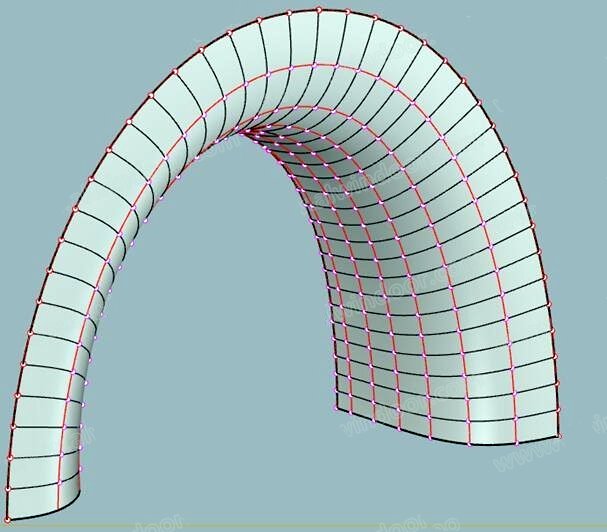 Figure 10 A variety of other grid methods 3 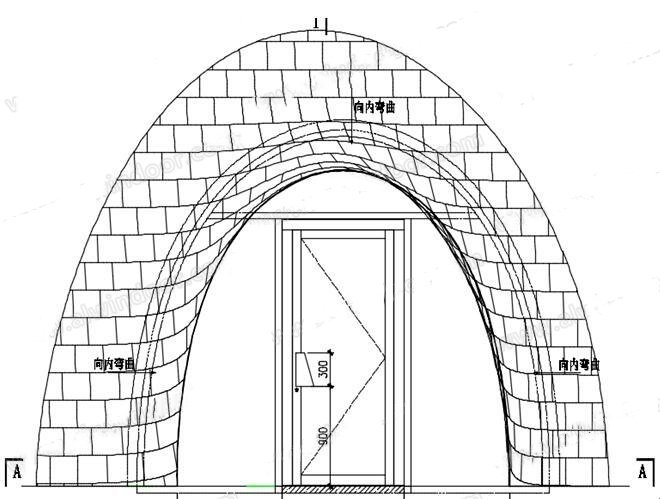 On the large façade, the corners of adjacent stone slabs are not large, which can be achieved through standard practices. However, the corners of adjacent overlaps at the entrance will be relatively large, and the warpage of the board will be more obvious. The arrangement of the main entrance makes the control line of the stone bend upwards. Because the stone slab material cannot be bent and formed, whether the adjacent stone is smoothly joined and whether it will affect the human visual effect due to the change of the angle. All must be carefully considered. Through actual lofting, we determined that the installation structure of the stone slate can adapt to this torsion, as shown in Figure 12: 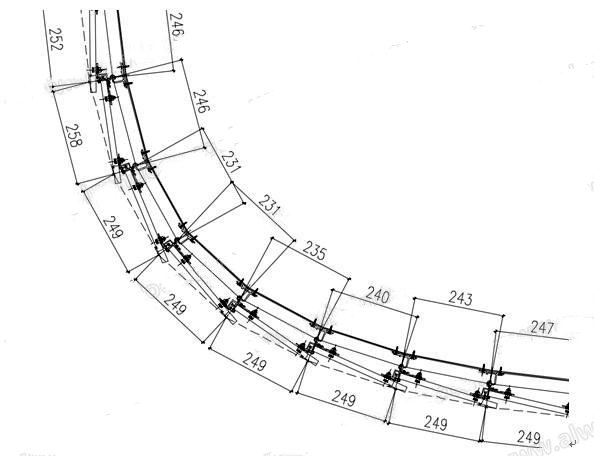 To meet the requirements of passive buildings, in addition to the installation of relatively thick insulation materials, the following special designs were also carried out:

2) The metal supporting keel penetrates the vapor barrier, and the penetration part needs to be treated to improve the sealing performance. See Figure 13 for illustration.

Figure 13 Treatment of the penetration of the sealing layer

3) The metal supporting keel penetrates the insulation layer and forms a thermal bridge. A thermal bridge is one of the key factors that affect whether the design of a near-zero energy building can meet the standard. Therefore, how to solve the problem of the thermal bridge at supporting points is very important. We optimize from two aspects.

One is to add a rubber block in the middle of the support. The second is to reduce the number of support points.

If the number of keel supports for the entire stone curtain wall can be reduced, the impact of thermal bridges will be reduced accordingly. Therefore, we increased the size of the keel in the design, which increased the span of the keel, thereby reducing the number of supports. The size of the keel has been adjusted from 120×80×5 steel square to 160×80×6, and the total number of supports has been reduced from 380 to 287. The distribution of keels and the positions of support points are shown in Figure 15. According to the analysis of CABR, this optimization has reduced the overall heat load of the building by 0.6kWh/m² a. 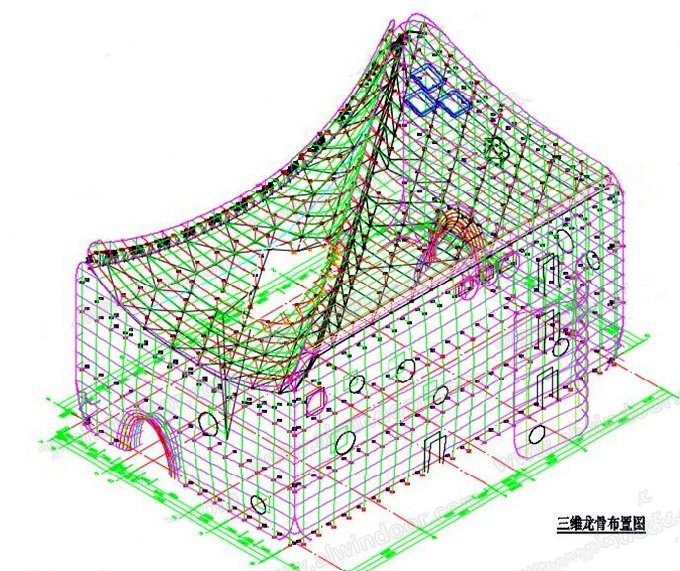 The main facade of the building is a full-height all-glass curtain wall. The building effect and elevation are shown in Figure 16 and Figure 17. 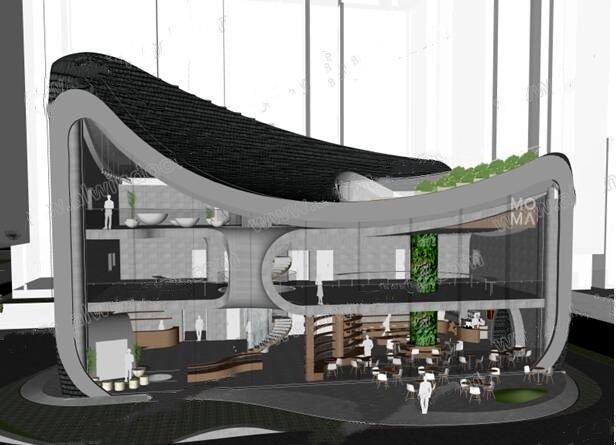 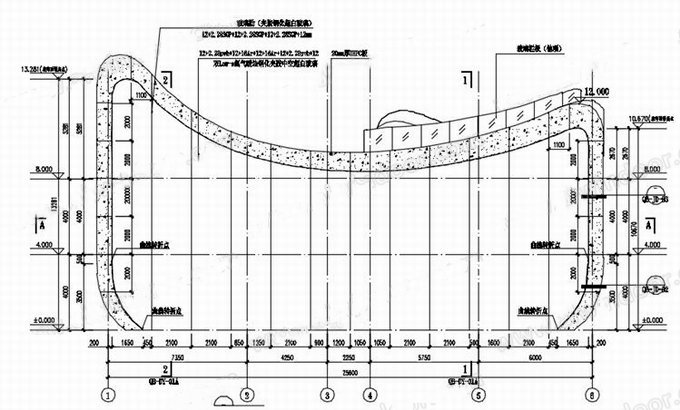 The height of the full glass curtain wall is about 13m, and the glass is connected by hanging. Because the appearance of the building requires the visible glass edge to be curved, but this brings great difficulties to glass processing. After optimization, we adjusted the glass edge to a broken line or a diagonal line and found the shape through the outer UHPC board to achieve Architectural effect. The facade of the glass is shown in. 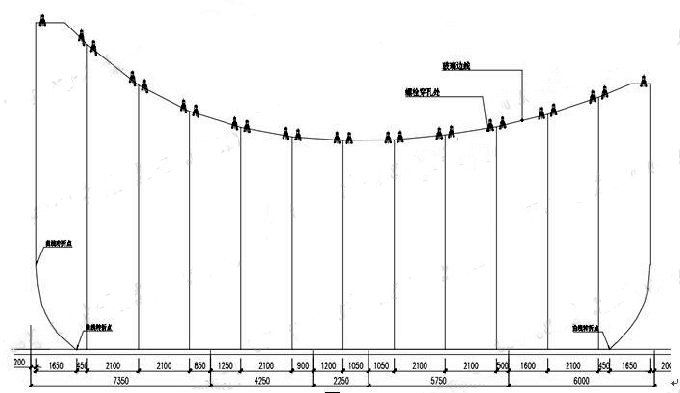 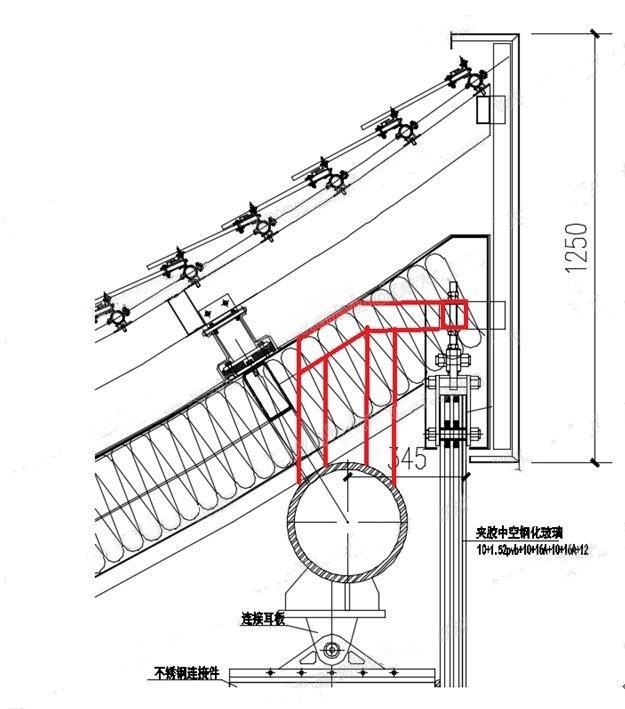 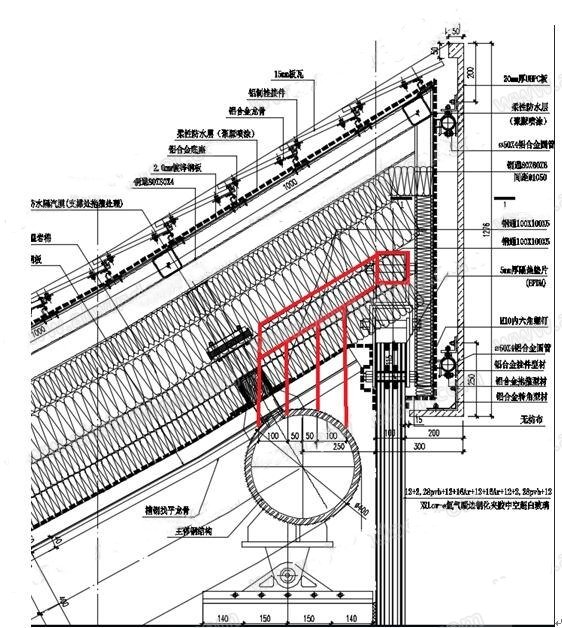 4. How to produce the outside windows

Building exterior windows use passively certified products, provided by Senying. What's more special is that the shape of the window cover of the outer window is more complicated, which is an aluminum plate shape with an inner square and an outer circle. Due to the large depth of the aluminum plate shaped hole, a certain degree of self-shielding effect is formed on the solar radiation, so the passive window is no longer equipped with external shading. Figure 21 shows the cross-sectional approach of the outer window, and Figure 22 shows the three-dimensional schematic diagram of the components of the aluminum plate window cover. 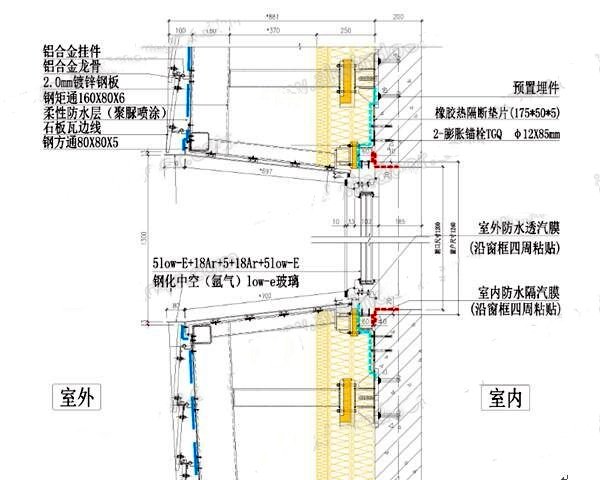 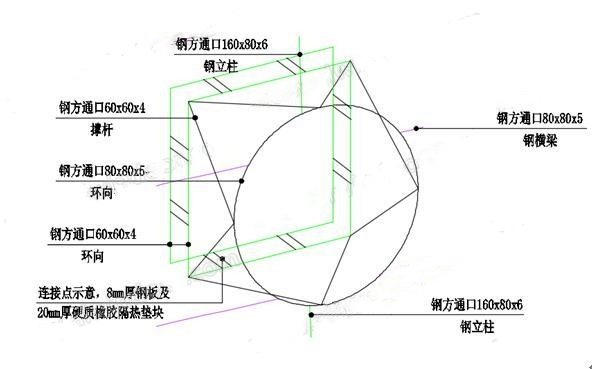