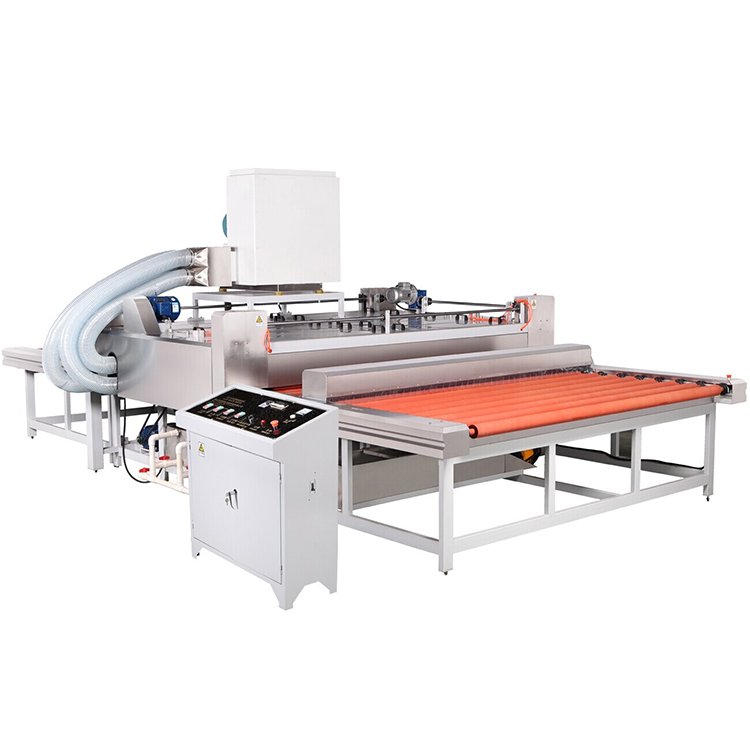 After the glass substrate is washed by a washing machine, the surface and section need to be dried. Commonly used drying methods include sponge roller squeeze drying and strong cold and hot air drying. The use of sponge roller squeeze drying has a poor drying effect on the cross-section of the substrate. At the same time, the sponge roller needs to be replaced regularly, otherwise, it is easy to contaminate the glass again. The use of an air knife to dry is to blow off the water attached to the glass surface in the process of cleaning the glass by high-pressure air to ensure that the washed glass is washing, drying, free of impurities, and no traces of water. Therefore, the quality of the air knife directly affects the glass washing machine effect. Drying is carried out using strong wind drying. During the whole drying process, the front section, side section, glass up and down to the rear section, the principle of air knife cutting water is to use high-speed knife-like airflow to make the water and particles on the glass surface follow the airflow. The direction rolls away from the glass surface. After the high-pressure strong wind enters the air knife, it blows out through the 1~2 mm nozzle gap, thereby forming a high-speed airflow sheet. This sheet will also drain several times the surrounding air. As a glass deep processing equipment manufacturer with many years of experience, Jinan LIJIANG Glass will recommend the latest Glass Washing and Drying Machine as a reference for you.

The drying process of the glass washing machine in the high-pressure air knife can be divided into the following stages.

1. Types and characteristics of air knives

In the design of the air knife, the knife-edge ticket extends as far as possible along the square of the wind blowing, so that the air will be sprayed out in a straight line as a whole, and the airflow will be easier to control. This design will also improve the airflow in the air knife. Entrainment of the inner wall of the cavity, so that the air knife can provide a stable, continuous, large amount of air based on the Coanda effect and air entrainment. The elongated knife edge uses the Coanda effect to guide the air to the surface of the knife-edge, so that the integrity of the wind continues to the downstream of the airflow, and creates the surrounding air entrainment, which ultimately improves the utilization rate of the wind. Generally, the air knife in the water removal stage and the water film removal stage is mainly to rapidly remove water, and the wind speed and pressure of the air knife should be higher. The effect of the knife is better, and the cross-section should be gradually reduced from the inlet end to the end. Not only can the longitudinal speed be increased, but the wind speed at the end can also be increased, but this will increase the difficulty and cost of manufacturing, and the constant cross-section air knife is often used in actual manufacturing. Except for the tail section stage, because there is no watermark on the large surface of the glass at this time, only the tail section has watermarks. The wind speed and pressure of the air knife are not high. Instead, a large flow of air is required for drying. The air knife at this stage In considering the difficulty of manufacturing, you can consider using a rectangular air knife. 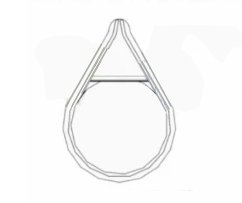 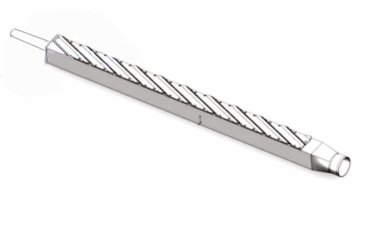 The air knife is square. The cut of the group knife is at a fixed angle to the centerline of the target, and it uses multiple parallel cutting methods. The air knives are placed parallel to the surface of the roller and are often used in the last group of hot air drying air knives to dry the water in the tail section of the glass. Figure 2 shows the structure of the Hefeng Knife

2. Layout of the air knife

According to the water removal stage of the air knife and the analysis of the water removal parameters of the industrial air knife, it is known that when the glass is dewatered, the glass must first be rapidly dewatered, and the high-pressure and high-speed air curtain formed by the high-pressure air knife is quickly blown off. There is a large amount of water layer on the glass, so the first group of air knives uses straight air knives. The gap between the straight air knife blades is 1~1.5 mm, the distance between the air knife blade and the upper and lower surfaces of the glass is 3~5 mm, and the front inclination angle of the blade is 15 ° ~ 30 °, which can effectively use the strong wind curtain of the straight air knife to quickly drive the water layer on the glass to the end section of the glass 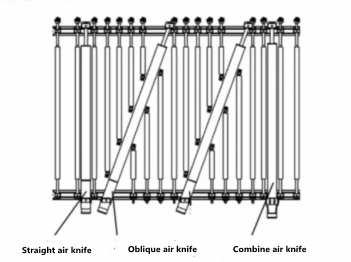 Figure 3 The layout of the air knife 1

3. The simulation of air knife

Through the previous analysis, it can be seen that the rapid dewatering stage is the key to the drying of the glass. This stage can not only quickly peel off the water layer and water film on the glass, but also reduce the pressure on the rear section of the air knife. The cross-sectional shape of the straight air knife and the oblique air knife in the water stage directly affect the drying effect.This article uses the FloXpress module in Solidworks to perform a fluid simulation to verify the outlet wind speed of the air knife and compare it with the theoretical calculation wind speed, and finally, obtain the cross-sectional drainage effect of the air knife.

Figure 4 The air velocity field of the air knife 1

Known: The effective length of the air knife blade is 1450 mm, and the blade gap is 1.3 mm. According to the actual use of the fan, the inlet airflow of a single air knife is 815 m/h. The theoretical wind speed of the building mosquito V Q/A 815 / 3600 / 1.45 * 0.0013 =120 m/ s. The same air knife parameters and flow are added to the FloXpress module, and the air velocity field of the air knife is shown in Figure 4 through simulation. Through the FloXpress simulation, it can be seen that the air knife has the largest air velocity at the nozzle tip, and the maximum air velocity is 123.586 m/s, which is consistent with the theoretical calculation results. Speed requirements. Therefore, the air knife section has a good effect on the water layer and water film on the glass surface and the tail section. At the same time, combined with the hot air drying effect of the air knife on the tail section, it can achieve rapid drying of the glass surface and section.

To further verify the correctness of the simulation results, experiments were carried out to test the drying effect of the washing machine. During the test, the maximum speed is 18m/min for testing. Figure 5 shows the equipment test scene diagram,

Figure 6 shows the effect of air knife drying. It can be seen from the test results that the use of this type of air knife arrangement structure has a good drying effect on the surface and section of the glass, and can quickly achieve drying. 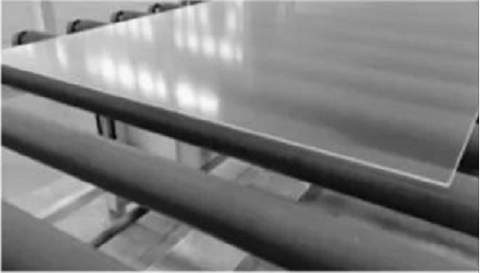 With the development of the glass industry and the application of glass deep processing in multiple production scenarios, it is developing towards high cleanliness and high dryness. This article analyzes the process of removing water from glass based on the theory of removing water from the glass. According to the process and mode of removing water, the section design and layout of the air knife are carried out, and the important air knife section is simulated by FloXpress, which is theoretically verified. Based on the rapid water removal effect of the air knife, it is concluded that the air knife with this section and layout has a better drying effect on the glass surface and section.