Cause analysis and preventive measures of insulating glass sealant failure 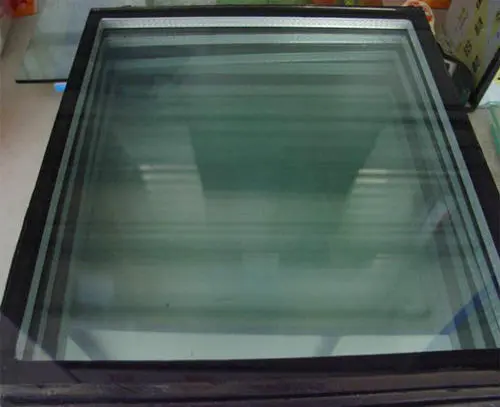 In recent years, hollow glass has experienced a series of serious quality problems, including

(1) condensation or frost on the inner surface of the hollow glass, air and water leakage;

(3) Rainbow phenomenon occurs in the coated hollow glass cavity or the film is corroded or oxidized;

(4) Bubbles are generated after the second sealant is cured, or embrittlement or cracking occurs after a period of use.

After analyzing and investigating many failure cases of insulating glass in recent years, the main reasons can be summarized into the following categories.

The sealant is generally a high molecular polymer, and the sealants usually used for insulating glass include polysulfide sealants, silicone sealants, butyl sealants, and polyurethane sealants. For these polymer materials, there is a fugacity difference (pressure difference or concentration difference) on both sides. On the side with higher fugacity, gas molecules (air and water) can enter the solid polymer, move and pass through the polymer. The chain array is released from the side with lower fugacity. The main factors affecting the diffusion of water vapor are the gas permeability coefficient of the polymer, the thickness of the glue layer, and the water vapor pressure difference between the inside and outside of the air layer [5].

J-diffusion speed refers to the amount of gas diffused through a certain thickness of polymer per unit time and unit area;

ΔP-gas content on both sides of the polymer Differential pressure.

It can be seen from the above relationship that under the condition that the thickness of the glue layer is the same as the environmental conditions, the smaller the gas permeability coefficient of the sealant material, the better its airtightness, and the less likely it is to cause the insulating glass seal to fail. If a sealant with a larger gas permeability coefficient is used in the production of insulating glass, it is easy to have poor sealing, increase the dew point of the insulating glass, condensation or frost, or even water ingress [6] (Figure 1.a, Figure 1.b).

White oil is a colorless, odorless, white oily long-chain alkane produced by high-pressure hydrogenation of petroleum lubricating oil fractions. It is often used in textile lubricants and coolants. It can improve the surface gloss of rubber products when used in small amounts. The basic composition of white oil is a saturated hydrocarbon structure, and the main component is a mixture of C16-C31 normal isoparaffins. It has a small molecular weight (250-450), a low boiling point, and is volatile. The molecular chain of white oil is mainly a CC bond, and it cannot dissolve the silicone sealant with a Si-O chemical bond as the main chain structure. It can only remain between the curled macromolecular chains, but with the crosslinking of the macromolecules, the solidification between the chains Distance compression, especially when the ambient temperature is high, the white oil will evaporate and ooze out. As time goes by, the silicone rubber will gradually harden, shrink, or even crack (Figure 2.b), resulting in bonding Invalidate. The main component of the first sealant butyl rubber used in insulating glass is polyisobutylene, whose molecular chain is mainly a C-C bond, which is similar to white oil, and the polarity between the two is similar. According to the principle of similar compatibility, when the butyl sealant encounters white oil, it will be swelled and dissolved by it, resulting in the flow of hollow glass (Figure 1.c). When white oil enters the coated hollow glass, the glass will appear rainbow phenomenon (Figure 1.d), and the coating will be corroded, which will lead to the failure of the coated glass. 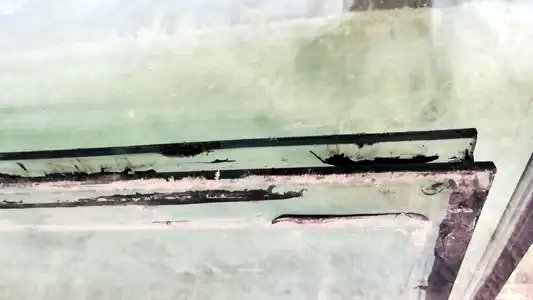 Figure 2.b The silicone rubber will gradually harden, shrink, or even crack 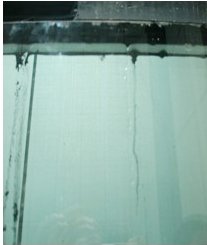 (2) Improper or uneven mixing ratio of sealant. The improper mixing ratio of the A and B components of the two-component sealant, and insufficient mixing will result in uneven curing of the glue, and poor bonding performance. In addition, if air bubbles are mixed during the mixing process, it is easy to cause glue breakage during the extrusion process and affect its bonding performance. 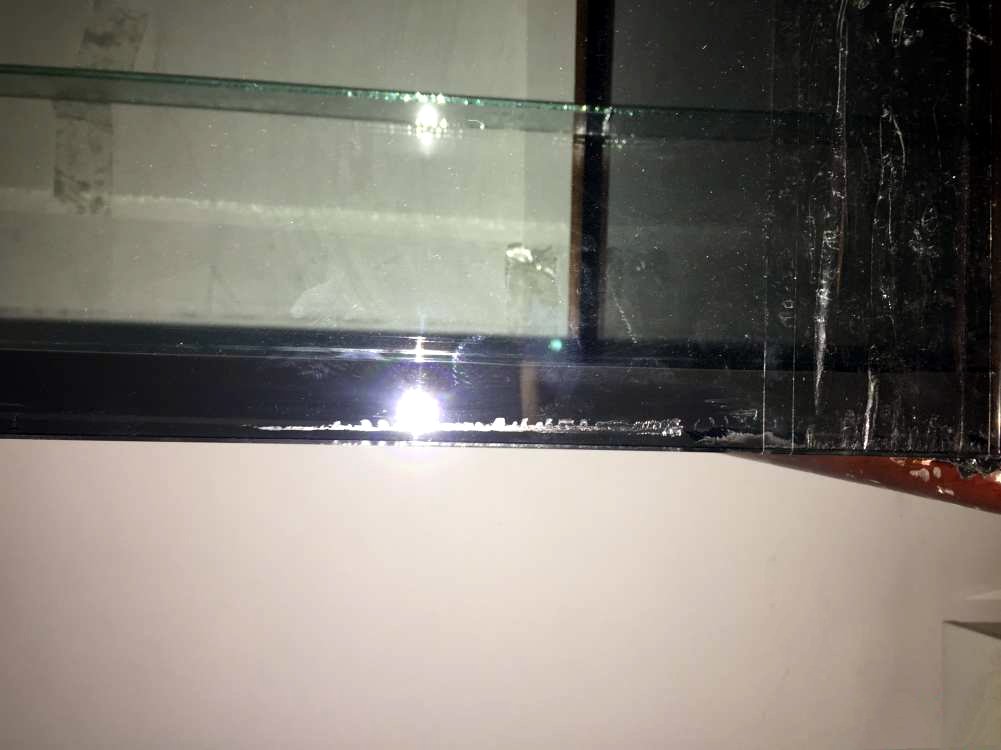 Figure 2.a The inside of the silicone colloid gathers to form bubbles

Choosing an insulating glass sealant with a low gas permeability is one of the effective measures to reduce the gas diffusion rate. Table 1 shows the results of the airtightness test of several commonly used insulating glass sealants by the EN1279 "Insulating Glass" standard. Among them, the gas permeability and water vapor permeability of butyl rubber is the smallest. This is because butyl rubber is long Linear tightly curled and easy-to-rotate molecular chain structure and the side methyl groups in the molecular chain are very densely arranged, which limits the thermal movement of polymer molecules and effectively reduces gas permeation, thereby giving butyl rubber excellent airtightness, Therefore, the current double-sealed insulating glass uses butyl rubber as the first sealing layer [7-8].

Compared with other sealants, silicone sealants have the worst airtightness, but silicone sealants have excellent resistance to ultraviolet radiation, water resistance, and other aging resistance, and the performance retention effect after long-term use is very good [9-10]. Polysulfide sealant has a low water vapor transmission rate, good adhesion to glass, and excellent oil and solvent resistance. It has excellent comprehensive performance and high-cost performance. It is the first to be used in the insulating glass industry. Sealant. In recent years, there has been quite a lot of research on insulating glass external sealants. From the actual use, a butyl/polysulfide sealing system (ie Ding) should be used for insulating glass such as building doors and windows, exposed frame glass curtain walls, air-conditioned locomotives, refrigerators, and freezers. Base glue is used as the first sealant, and polysulfide sealant is used as the second seal); for a hidden frame or semi-hidden frame glass curtain wall, which needs to bear the structural strength, the butyl/silicone sealing system should be selected [11].

3.2 Eliminate the use of silicone sealants mixed with white oil 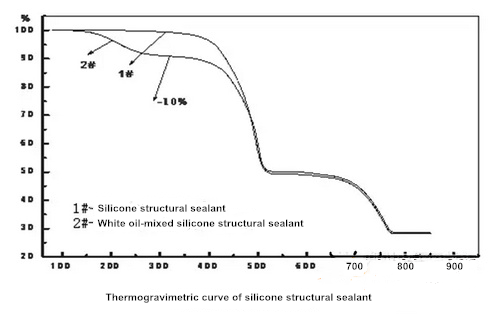 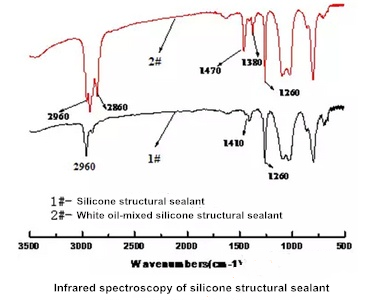 In Figure 3, curve 2# is the thermal weight loss curve of white oil-mixed sealant (white oil content 10%), which starts to lose weight at 160°C. This is because white oil is a low-boiling substance with a flashpoint of only 160-230°C; The thermal weight loss curve (1#) of silicone sealant without white oil shows that the starting point of weight loss is about 400℃. Through this comparative analysis, it can be judged whether the silicone sealant is mixed with white oil.Figure 4 shows the infrared spectrum of the silicone structural sealant. The Si-CH3 absorption peak at 31500px-1, the stretching vibration absorption peak of Si-O-Si at 1130-25000px-1, and the non-CH of CH3 at 74000px-1 Symmetric stretching vibration peaks, the above characteristic peaks appear in both 1# and 2#; and in the 2# spectrum, the CH3 symmetric bending vibration of CH3 appears at 34500px-1, and 1470cm-1 is the absorption peak of CH2 bending vibration, and at 2860cm The CH asymmetric stretching vibration of CH2 appears at -1. Therefore, it can be qualitatively judged that there is white oil in 2# sealant.Based on the above analysis, it can be seen that the use of thermogravimetric analysis and infrared spectroscopy can effectively determine whether the silicone sealant is mixed with white oil, which can be used as a basis to eliminate the use of silicone sealant mixed with white oil.

(1) The cleaning of the substrate surface and the choice of solventThe surface of the material is the key to sealing and bonding. Regardless of the surface of the material, it is easy to adhere to unclean substances during on-site construction, such as oil, dust, release agent, moisture, or the remaining substances after the removal of the protective tape film Wait. These materials should be cleaned with solvents before applying sealant, but not every solvent can effectively remove any contaminants. The use of some solvents may seriously damage the surface of a certain material, so the correct choice of solvent is a key link in the surface cleaning requirements of bonding materials.The choice of solvent varies with contaminants. Non-oily dust and dirt can be removed with 50% isopropyl alcohol (IPA) plus 50% deionized water or 75% alcohol. Oily dirt and films need to be cleaned with degreasing solvents such as MEK and xylene.The cleaning solvent can also be selected according to different seasons. Among them, IPA and MEK can be dissolved in water, so they are very suitable for use in winter. It can effectively remove condensation and frost on the surface of the substrate. Toluene and xylene are not soluble in water, so they are more suitable for summer use.

(2) Construction and maintenance conditionsInsulating glass sealant should be constructed and maintained under the specified temperature and humidity conditions (refer to the requirements of the sealant supplier) to prevent the occurrence of excessively high or low construction and curing temperatures that may affect the performance of the sealant.

(3) Gluing processThe glue-making process of the sealant is an important link in the production of insulating glass, which determines the overall quality of the insulating glass products. The first sealant butyl rubber should be applied uniformly, and the cross-section of the glue should be consistent. Check carefully whether there are broken wires, bubbles, and impurities that affect the appearance. The four-corner butyl rubber strips should be in contact with each other and pressed together, and renewed if necessary. Apply or repair glue to avoid the hidden danger of air leakage. The second sealant is generally two-component polysulfide or silicone sealant, and the following requirements should be met when applying the glue: A and B components should be in strict accordance with the mixing ratio provided by the manufacturer, and the two components should be fully mixed Even (tested by the "butterfly test"), the amount of glue is accurate, and there is no lack of glue and excessive glue. When applying glue, apply the glue in one direction at a uniform speed as much as possible to prevent air bubbles. After the glue is applied, scrape off the residual glue on the glass surface and make close contact with the first sealant without leaving any gaps.

there are many reasons for the failure of the insulating glass sealant, mainly including the selection of raw materials, the selection of the sealant, and the construction process. In the actual application process, suitable sealants and sealants with guaranteed quality should be selected, avoid the use of silicone sealants mixed with white oil, strictly control the construction process, and other measures to prevent the occurrence of sealant failure, and extend the insulating glass effective service life.