Analysis of the changes of SHGC and Tv values of architectural glass at different angles.

When glass producers observe the glass from different angles, they will feel that the reflection and transmission states of the glass after being irradiated by light (especially natural light) are different. So what are the changes in the SHGC and Tv values of architectural glass at different angles? This article will focus on this topic, and propose the use of movable external shading, built-in movable shading, color-changing glass and other measures to carry out the shading work of architectural glass.

1. The statement of problem

g——represents the total solar transmittance of the sample, %;

τe——represents the direct sunlight transmittance of the sample, %;

qi——represents the secondary heat transfer coefficient of the sample to the indoor side, %.

The formula for calculating the solar heat gain coefficient (SHGC) specified in the international standard "Code for Thermal Engineering Design of Civil Buildings" is as follows:

g——the total transmittance of sunlight in the light-transmitting part;

Ag - the area of the light-transmitting part (m2);

αe——Convection heat transfer coefficient of the outer surface of the non-transparent part [W/(m*K)];

The optical properties of glass also vary with wavelength, the transmittance and absorbance ratios are spectral averages. The solar heat gain coefficient value is based on a standard spectral distribution with an air mass ratio (the ratio of the actual observed solar path to the solar path at standard atmospheric pressure when the observer is at sea level and the sun is at the zenith) of 1.5. This spectrum is recommended by the National Window and Door Evaluation Board for evaluating the energy performance of windows and doors using specified environmental and incident radiation conditions. For the actual solar heat gain calculation conditions or the glass exhibits spectral selectivity, the used projected solar spectrum should be corrected according to the standard spectrum, which is more in line with the local atmospheric conditions and calculation time.

In practical engineering, the angle of the sun changes all the time, and it often irradiates the glass surface of doors, windows, and curtain walls at different angles.

So here comes the question:

(1) Are SHGC and Tv values consistent with a normal incidence at different angles of incidence, and how does the angle affect them?

(2) For the glass of doors, windows, and curtain walls, the sun is only irradiated for a short period of a day. What are the more reasonable measures for shading and heat insulation?

2. Discussion on SHGC and Tv Values at Different Incident Angles

The WINDOW software developed by LBNL can calculate all optical and thermal properties of monolithic glass, insulating glass, glass doors, and windows, such as visible light transmittance, shading coefficient, heat transfer coefficient, etc. Its WINDOWS5 software contains an International Glass Database (IGDB), which provides optical data of more than 1,800 kinds of glass and related products from major international glass manufacturers, including all optical performance indicators of glass and related products, and timely updates with new data. The software also contains the performance database of commonly used door and window frame materials, and the performance database of insulating glass inert gas. WINDOW software calculates the SHGC and Tv values of architectural glass at different angles. Taking a 5mm ordinary glass as an example, the results of SHGC and Tv values at different angles are shown in the figure below. 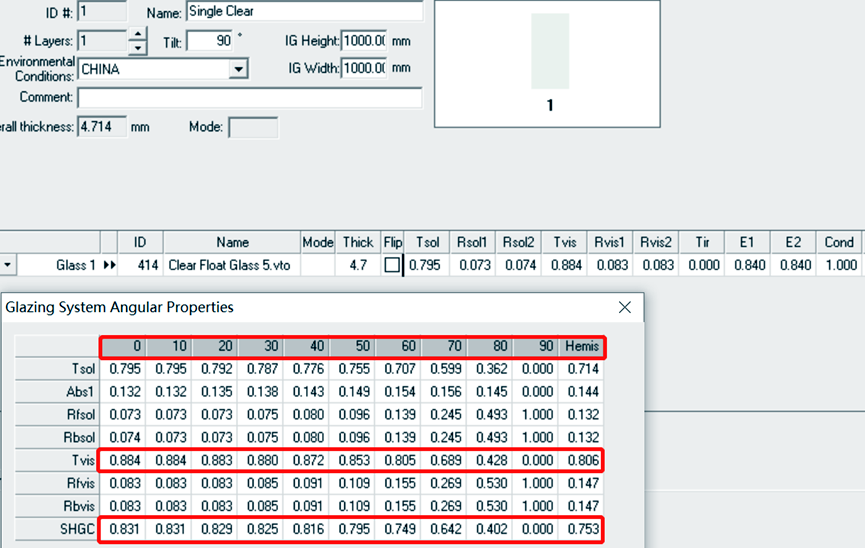 The graphs of SHGC and Tv values changing with the angle are as follows. 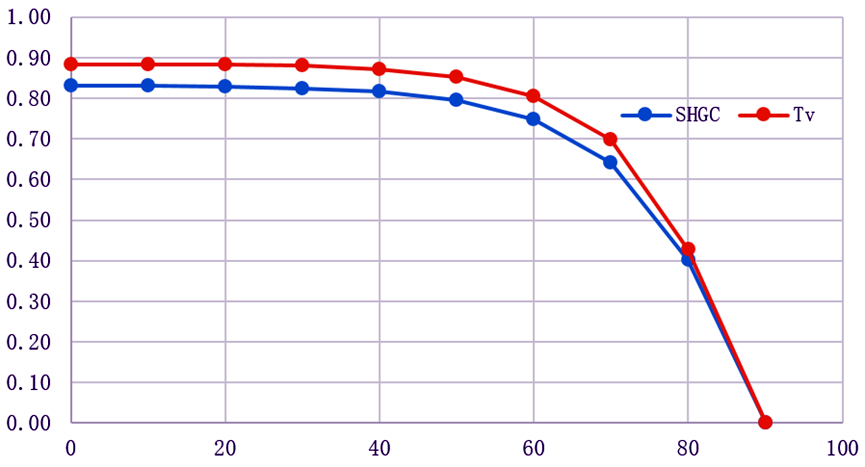 Figure 2 The graph of SHGC, Tv value changing with incident angle of light

Jinan LIJIANG Glass has researched various other glass configurations, and because the laws are similar, they will not be listed here.

3. Some thoughts on the influence of angle on SHGC and Tv values

The above study shows that when the solar incident angle exceeds a certain value (about 60°), the SHGC and Tv values of the glass are greatly reduced. What value does this have for our engineering design?

The first is the problem of setting sunshade measures for external windows with different orientations in summer. Take the changes in the sun height and the length of day and night at the vernal equinox, autumn equinox, summer solstice, and winter solstice in the area of 40° north latitude as an example, see the figure below. 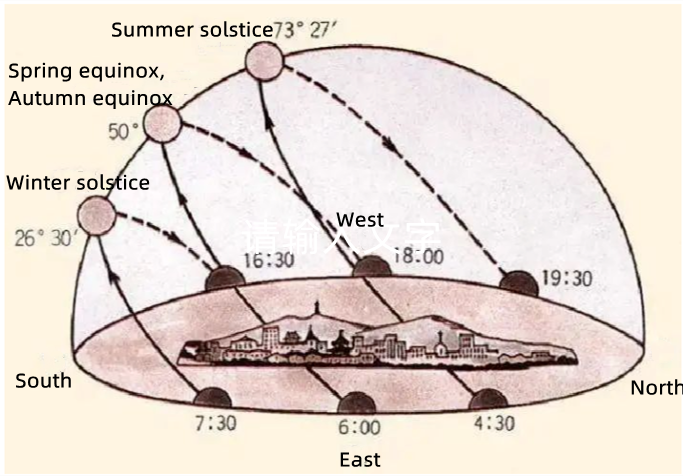 It can be seen that the height angle of the sun at noon in summer is relatively high (over 60°), and the azimuth angle during the solar irradiation period is relatively large, resulting in a large angle between the south-facing window glass and the sun. Play a certain role in self-shading.

In summer, due to the lower sun altitude angle in the morning and evening, the glass SHGC value is higher, and the indoor heat gain is more, especially in the west direction, which is also the main reason for "west sun", and shading measures should be taken.

The second is the setting of shading measures at different periods.

Short-term dynamic shading means that measures such as movable external shading, built-in movable shading, and color-changing glass should be used as much as possible.

Summer is the key period when we need shading. In most parts of our country, the sun altitude angle is high at noon (more than 60°), and the glass SHGC will be reduced at this time, which has a certain self-shading effect.

In summer, due to the lower sun altitude angle in the morning and evening, the glass SHGC value is higher, and the indoor heat gain is more, especially in the west direction, which is also the main reason for "west sun", and shading measures should be taken.

Direct solar radiation has short-term characteristics, and shading facilities are not required for most of the day. Therefore, it is recommended that the SHGC value be a short-term dynamic value, which can ensure short-term shading of solar radiation.

Some developed countries have carried out some research work on the determination of solar heat gain of windows and solar heat gain coefficient, and have formed a preliminary theoretical system in terms of measurement conditions, instruments, and equipment, measurement process, calculation steps, etc., and have formulated provisional standards. In the standard issued by the American Society for Testing and Materials (ASTM), it is proposed to measure the heat flow through the test piece and the thermophysical properties of the material by the protected hot plate method or the heat flow meter method and measure the heat transfer of the window by the hot box method. A range of methods to measure the physical properties of materials, such as coefficients or thermal properties of building components.

Of course, this article is only a preliminary discussion on the changes in glass SHGC and Tv values from different angles. The study of building thermal environments is a specialized discipline, which requires us to study and understand more deeply.