Discussion on the adhesion of silicone sealant to insulating glass 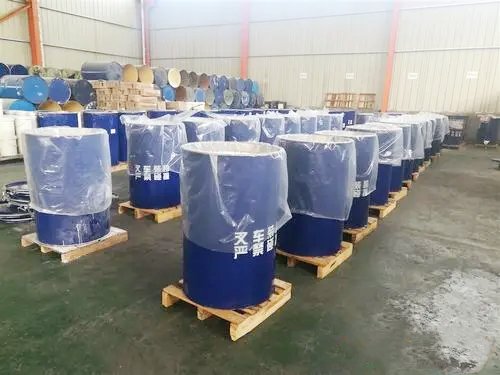 The energy issue is the primary issue in the economic development of the world today, and energy conservation is an inevitable requirement for achieving sustainable development. Therefore, building energy conservation is also receiving increasing attention. Glass doors and windows are the weakest energy-saving part of the four major components of building envelopes. Insulating glass is one of the effective ways to slow down its energy loss. Low-E glass can not only meet people's aesthetic needs for buildings, but also solve the problems of heat control, cooling costs, and comfortable balance of internal sunlight projection. It has become an increasingly important part of the field of building energy conservation. Low-E insulating glass is in the middle of two or more pieces of Low-E (The "dry" gas is provided by Google). Its unique spatial structure can block the heat conduction channel, thereby effectively reducing its heat transfer coefficient. It is a glass product with energy-saving, sound insulation, and environmental protection functions. Therefore, Jinan LIJIANG Glass analyzed the reasons for the failure of the insulating glass and pointed out that the sealant is one of the factors affecting the failure of the insulating glass.

In my country's insulating glass market, the sealing process of insulating glass can be divided into three sealing, double sealing, and single sealing. The latter two sealing types are more common. The most common room temperature curing sealant uses a two-pass sealing process. The inner channel (or one channel) sealant of the double-channel seal mainly uses thermoplastic polyisobutylene sealant, whose main function is to reduce the permeability of water vapor and edges. The outer (or second) sealant mainly includes polysulfide sealant (PS) and silicone sealant (the term "silicone sealant" is provided by Google), which mainly serves as a bonding and sealing effect. Silicone sealant has good bonding properties and UV aging resistance and can be applied to all insulating glass, so it is widely recognized by the market. This article mainly discusses the influencing factors of the adhesiveness of silicone sealant for insulating glass.

Use the silicone structural sealant according to the use method provided in the product manual, refer to the "silicone structural sealant for insulating glass" (GB24266-2009) standard, use 50mm×50mm×6mm Low-E glass or non-coated float Method glass is the bonding test object. Prepare the H-type tensile bonding test sample shown in Figure 1, and after curing for 14 days under the standard conditions specified in GB/T 16776-2005, it is treated in a water UV box at 45°C for 300 hours. (UV wavelength 340nm), water immersion treatment for 300h, UV box treatment for 300h (UV wavelength 340nm), and then tensile bonding test.

3.1 Investigation of the adhesion of silicone sealant to uncoated glass

3.2 Investigation of the adhesion of silicone sealant to offline Low-E glass

Because Low-E insulating glass has a better energy-saving effect than ordinary insulating glass, it is more and more popular in the market. This experiment examines S1, S2, S3, which have better UV adhesion to uncoated glass water, to offline Low-E The adhesion of glass, the test results under different processing conditions are shown in Table 2.

It can be seen from Table 2 that S1 and S2 silicone sealants have high colloidal tensile bonding strength, and it is easy to peel the Low-E film from the glass surface during the test process of the H-type specimen, especially in the water UV at 45°C. Under these conditions, the Low-E film was peeled off in the test pieces prepared by the three types of silicone adhesives. The production process of offline Low-E glass is usually through the vacuum magnetron sputtering method to deposit a large number of the neutral target material (the term "target material" provided by Google) atomic (or molecular) film layer, The film is formed by the process is a soft film, and the film has poor abrasion resistance (the term "wear resistance" is provided by Google), chemical stability (the term "chemical stability" is provided by Google), and thermal stability. When the bonding strength of the sealant is high, the Low-E film is likely to be peeled off by the sealant. Figure 2 shows the Low-E film peeled off by S1 silicone sealant. 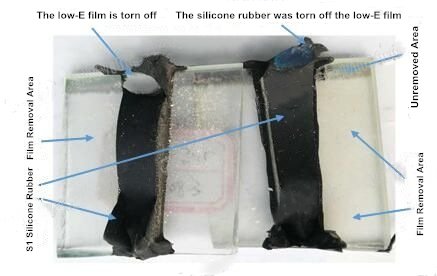 It can be seen from Fig. 2 that the S1 silicone glue adheres well to the Low-E glass film-removed part, while the Low-E film of the non-film-removed part is torn from the glass panel by the silicone adhesive S1. The shedding of the film layer will cause the bonding and sealing of the insulating glass to fail. It means that during the production process of Low-E insulating glass, it is necessary to remove the film on the edges that need to be sealed and bonded. The main domestic Low-E Insulating glass manufacturers all remove the film on the edges. Therefore, this paper investigates the water-ultraviolet adhesion of silicone sealant to Low-E film-removing glass.

3.3 The water and ultraviolet adhesion of silicone sealant to the film-removed Low-E glass

3.3.1 The influence of film removal method on adhesion

In this experiment, the water UV adhesion of different silicone sealants to Low-E glass with different film removal degrees was investigated. The results are shown in Table 3.

3.3.2 The influence of the film removal wheel on the adhesion

The film removal process will affect the water-ultraviolet adhesion of the silicone structural adhesive to the offline Low-E glass. In the production process of the offline Low-E insulating glass, the edge Low-E film should be removed as cleanly as possible. However, it is difficult to remove the film on the edge of the Low-E glass to achieve the same cleanness as the surface of the uncoated float glass, and the selection of high-quality silicone structural sealant with good applicability can make up for this shortcoming.